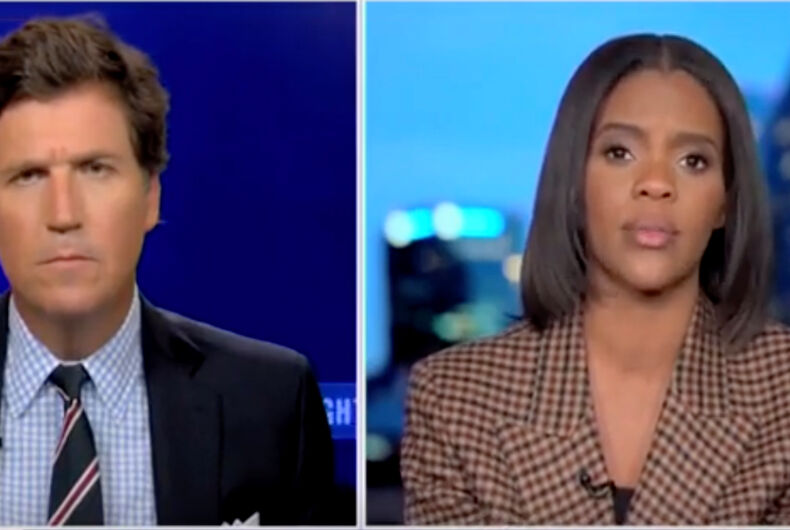 Several prominent conservatives who have been demonizing LGBTQ people this past year as groomers who want to castrate children have a message for America in the wake of Saturday night’s mass shooting at an LGBTQ bar that left five people dead and at least 18 people injured.

It’s not our fault.

“So the most obvious question is why did [Club Q shooter] Anderson Lee Aldrich shoot 30 people?” Carlson asked on his show last night. “The truth is we don’t know.”

He also mocked people saying that demonizing LGBTQ people as child molesters may have led to violence against LGBTQ people. “Anderson Lee Aldrich committed mass murder because you complained about the sexualizing of children,” he said mockingly on his program.

Media Matters put together a montage of Carlson’s demonization of LGBTQ people.

Tucker: So the most obvious question is why did he shoot 30 people? The truth is we don’t know pic.twitter.com/DOhhC6sYV2

One day after the Club Q shooting, Tucker Carlson devoted his entire monologue to the same rhetoric that is inspiring bomb threats at children's hospitals and attacks at drag shows.

But something tells me gay people aren't the ones obsessed with children's genitals. pic.twitter.com/mGto9VEqjv

Daily Wire writer Matt Walsh rose to fame with his anti-transgender propaganda film What is a Woman? and is touring the country right now speaking to young people about the dangers of transgender identity. He has been caught lying about what he calls the “proliferation of transgenderism” – which is what he calls more trans people feeling safe to be themselves – and he refers to all gender-affirming care as “castrating children,” even though genital surgery is not performed on transgender minors.

After the shooting, he got mad… at anyone who claimed that his reckless rhetoric may have inspired the shooter.

“Leftists are using a mass shooting to try and blackmail us into accepting the castration and sexualization of children,” he tweeted. “These people are just beyond evil. I have never felt more motivated to oppose everything they stand for, with every fiber of my being. Despicable scumbags.”

“Soulless demons,” he said about the mostly LGBTQ people criticizing him. “Evil to the core. Truly.”

People die and the first thing they think is, "Yes! We can use this as ammo against conservatives who don't think children should be exposed to drag shows!"

Chaya Raichik – who goes by “Libs of TikTok” on social media – has made her mark on the internet by calling out LGBTQ people and allies as targets for harassment to her followers. Her Twitter account is mainly just videos of LGBTQ people talking about how they have a rainbow flag in their classrooms or how they explain their identities to children who ask, and she has popularized the use of the word “groomer” to refer to anyone who is openly LGBTQ near children.

Her lies have possibly led to bomb threats, like when she falsely accused Boston Children’s Hospital of performing genital surgeries on trans youth as young as two or three years old.

When her account’s name was mentioned in coverage of the Club Q shooting, she started retweeting other anti-LGBTQ activists’ denials that their constant bombardment of grotesque accusations against LGBTQ people could ever lead to violence. 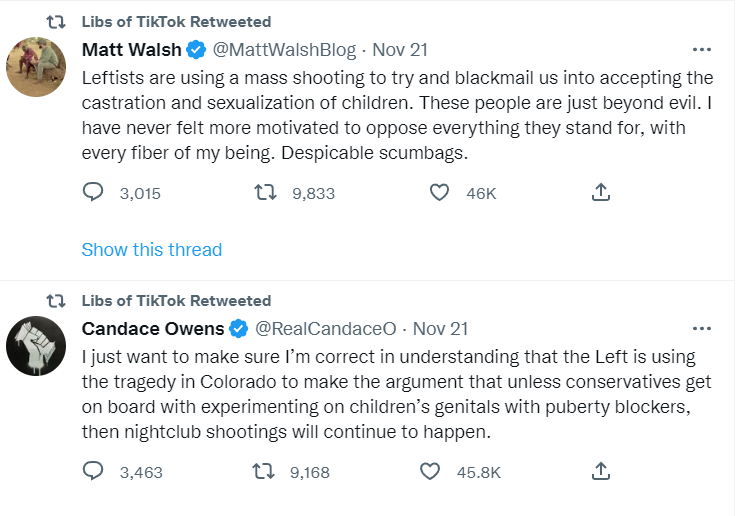 She also retweeted an argument that saying that her rhetoric is related to the shooting is the same thing as saying the media can cause violence against her by accusing her of making baseless accusations of child sex abuse against LGBTQ people and allies.

Anti-vaxxer Candace Owens attacked Dwyane Wade because his daughter is transgender, accusing the former NBA player of making her wear “long nine-inch nails and a belly shirt.” She has called trans acceptance “celebrating mental illness” and said that accepting trans people has led to an increase in crime, even though the crimes she mentioned weren’t committed by transgender people.

But on Twitter yesterday, she mocked “the Left” for saying that anti-transgender rhetoric could fuel anti-transgender violence, accusing trans-friendly doctors of “experimenting on children’s genitals” even though gender-affirming genital surgery isn’t performed on minors.

“I just want to make sure I’m correct in understanding that the Left is using the tragedy in Colorado to make the argument that unless conservatives get on board with experimenting on children’s genitals with puberty blockers, then nightclub shootings will continue to happen,” she wrote. “It’s so implausibly stupid I had to write it out.”

It’s so implausibly stupid I had to write it out.

Daily Wire editor Ben Shapiro called for people to get fired when Fox News aired a segment about Pride Month earlier this year.

“This would be absolute despicable insane lunacy if I saw it on CNN or MSNBC,” he said at the time. “To see it on Fox News is a complete betrayal of anything remotely resembling conservatism or decency.”

Shapiro said in April that learning about LGBTQ people is “grooming,” a tactic used by child sex abusers to gain the trust of their victims. He said on his podcast that President Joe Biden wants to “cut the healthy breasts off your 15-year-old girl” in order to “trans the kids” and said Democrats’ “agenda” is “recruiting your children into a cult of expressive individualism that is going to wreck their life and also ruin the future of America.”

After the Colorado Springs shooting, he called LGBTQ people and allies “trash” for insinuating that the constant drumming of hate speech could lead to hate crimes.

Republicans: “These evil perverted disgusting predatory groomer lgbt drag shows are corrupting our children. Destroying our nation. This cannot go on. Someone, anyone, do something”

Also Republican: “Someone did something? How is this out fault?”

Remember them: These are the 5 victims of the Colorado Club Q shooting