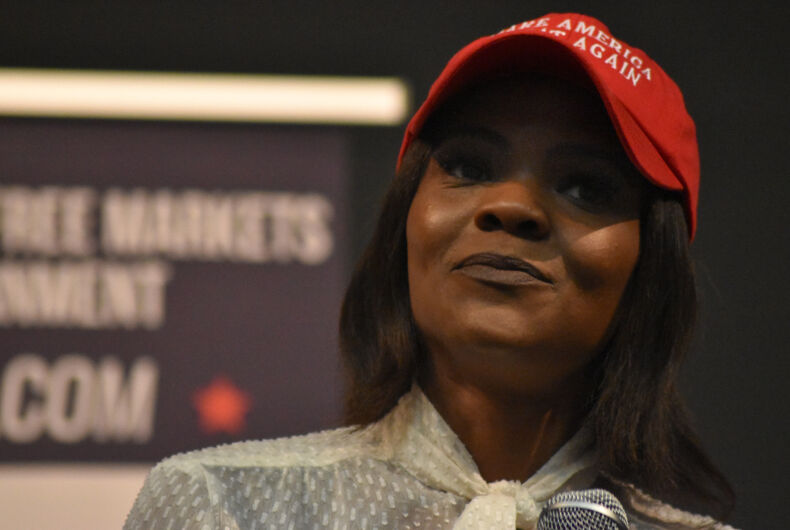 Far-right pundit Candace Owens, one of former president Donald Trump’s biggest supporters, quickly made a name for herself by emulating Ann Coulter. She makes aggressively offensive statements to advance her political agenda.

But she hit a new low when she launched an ugly attack on NBA player Dwyane Wade’s 13-year-old daughter, Zaya.

Related: Michelle Obama says she’s proud of Zaya Wade for “being an amazing role model” for other teens

Owens was speaking about the “perversity” in the queer community when she used it as a springboard for her brave broadside against a teenager. Owens’s bravery is doesn’t extend to slurring children in front of their father, only when no one is there to confront her.

“His son now says that he is a woman and Dwyane Wade is… ‘This is who he’s always been.’ No, it’s not!” Owens sneered. “You’re not going to tell me that your child is wearing long nine-inch nails and a belly shirt because that’s just how they came out.”

Owens incorrectly refers to Zaya throughout as “Zara.”

“A child does not naturally gravitate to putting glue and nine-inch nails on their hands,” she said.

Earlier this month, Owens tried to come for pro soccer player Megan Rapinoe, calling her an “anti-American piece of trash.”

Rapinoe, who won a gold medal in the 2016 Olympics, is among the most popular women athletes in the nation and her fans run the gamut of political persuasions. Liberal fans quickly shot back, mocking Owens faux outrage. But conservatives quickly called her out for attacking an Olympic athlete and abandoning patriotism.

And then the veterans stepped in. Then international soccer fans piled on. And Owens’s “own” quickly became a loss.

But all that attention apparently made Owens even more motivated to insult athletes – and their children.

Reactions on social media were quick – and as vicious as she is.

“She has some gall,” Donnie Belk tweeted. “What was lacking in Candace’s own up bringing that caused her to turn out this way?”

“Shouldn’t she be pregnant and barefoot at home? And most importantly QUIET?” Bevin opined. “Live your own values, Candy!”

But user @AriesaSandino may have the best possible advice for Owens. The pundit may have insulted Wade and his daughter, but the one to watch out for is Zaya’s stepmom, actor Gabrielle Union.

“Candace Owens may want to ‘pull up’ because she DOES NOT want to go head-to-head with @itsgabrielleu,” they warned.

She has some gall. What was lacking in Candace’s own up brining that caused her to turn out this way?

Shouldn’t she be pregnant and barefoot at home? And most importantly QUIET? Live your own values, Candy!

Dancing with the Stars gets its first same-sex pair after 30 seasons. JoJo Siwa’s part of it.