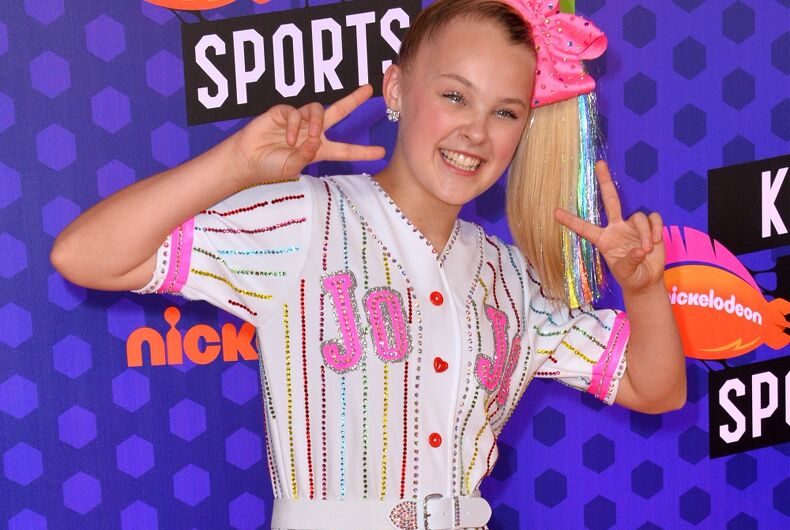 Teen sensation JoJo Siwa is breaking another barrier: she’s going to be half of the first ever same-sex pair on season 30 of Dancing with the Stars, ABC’s popular and long-running dance competition show.

Siwa, 18, is going to be paired with a female professional dancer on the show, where they will prepared choreographed routines for the judges.

Related: The first male couple on Denmark’s “Dancing with the Stars” is stirring up controversy… & winning

“It’s really special that not only now do I get to share with the world that you get to love who you want to love, but also you get a dance with whom you want to dance,” she told Variety.

She said dancing with the same sex opens up questions that haven’t been raised on the show before, like “who leads, how do you dress, what shoes do you wear?”

“But I think it’s all something that I’m looking forward to,” Siwa continued. “It’s going to be tricky, but it’s going to give so much to people out there — people of the LGBTQ community, people who feel just a little different. It’s going to give them a sense of happiness.”

Siwa is far from the first LGBTQ celebrity to appear on the show. Olympic figure skaters Adam Rippon and Johnny Weir, fashion commentator Carson Kressley, tennis player Martina Navratilova, singer Lance Bass, and comedian Margaret Cho have all appeared on the popular franchise, and were all paired with someone of the opposite sex.

The show has faced criticism for its resistance to same-sex pairs on the show.

Last year GLAAD CEO and President Sarah Kate Ellis said, “It’s past time for same-sex couples to compete on Dancing With the Stars,” and called on producers to “prioritize creating a show where the diversity of their competition is fully inclusive and reflective of the U.S. population today.”

She noted that same-sex pairings have already happened on other countries’ versions of the show and they were able to compete just fine.

Siwa came out earlier this year, making her one of the biggest stars whose audience is mostly children to come out. She has already fought for LGBTQ representation in the media, getting a kiss with a boy cut from one of her movies so that her character wouldn’t get read as straight.

This isn’t her first appearance on a dance-themed reality show. Siwa appeared on Abby’s Ultimate Dance Competition on Lifetime and then on two seasons of Dance Moms on the same network.