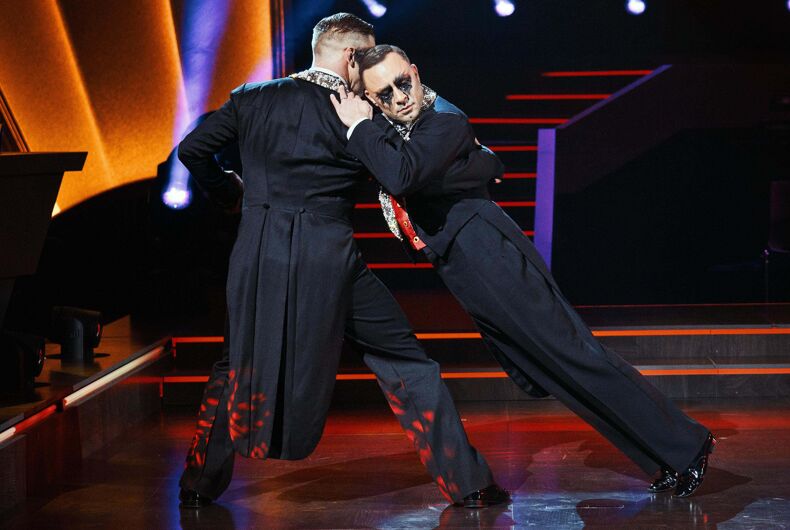 Jakob Fauerby and Silas Holst are making Danish TV history with their appearance together on Vild med Dans, the country’s version of the Dancing With the Stars franchise.

The pair is the first same-sex couple in the show’s 16-year history and so far they have scored the highest points in four out of eight episodes. And this Friday they’ll compete once again in a season that has surprised many, especially Fauerby himself.

“Not in my wildest dreams did I anticipate this,” said Fauerby, a Copenhagen-based actor who said that his goal all along, aside from becoming a better dancer, was to show people that same-sex dancing was something they could tolerate.

The experience, says Fauerby – best known for his membership in the satirical group PLATT-FORM – has been an “amazing rollercoaster.” Even in liberal Denmark, the news that the wildly popular show would feature two men dancing sparked controversy among some long-time fans. The criticism ranged from the ugly, like those that complained about how it was “unnatural,” to laments about how few beautiful dancing gowns the season would showcase. Many more wondered who would be “the man” and who would be “the woman.”

Through it all, Fauerby has maintained a positive outlook, confident that what he is doing is good for his fellow Danes, especially his fellow LGBTQ brothers and sisters. It was actually Fauerby’s decision to set the condition of dancing with another male.

“I had already thought that if they called me, I would ask if it was possible to dance with a man,” said Fauerby. “So, when they called and I asked, they said it was probably something they could talk about.”

A few days later he received the good news that his request could be met. Fauerby credits the producers for creating the opportunity, noting that he believes producers probably wanted to feature a same-sex couple for quite some time but that they were unsure about how to ask someone to represent the LGBTQ community. They also had to find the right professional dancer who was willing to participate.

“It’s difficult to ask someone ‘Hey do you want to be in the show, but do you want to be the LGBT representation of it?’” he said. “So, I think they just waited for someone to express the willingness to do it themselves.”

As for the dancer, they found an enthusiastic participant in Silas Holst, a Vild med Dans favorite who came back from a five-year break to dance with Fauerby.

“I am absolutely delighted, but it is even more important to me that we do well,” Holst told Danish outlet B.T.

Watching them dance, it is no wonder that the pair has been victorious in half of the shows that have aired so far. Indeed, many of the comments from fans have pointed out that it can be sometimes hard to tell who is the professional and who is the amateur.

Throughout the competition, Fauerby has met his critics and detractors head-on. He has made the rounds on TV news shows and radio call-in shows to speak directly to his critics. But he says he understands why there are such strong feelings about it, especially in the age of streaming and on-demand.

“We are a small country of only 5.6 million people, and every Friday more than a million people tune in to watch the show and many more watch it on-demand afterward,” said Fauerby. “There are very few shows that everyone sees, and this is one of them, so there are a lot of feelings connected to it.”

So Fauerby has tried to meet these people where they are in order to understand them better, but also to let them know that he has no plans on “ruining” the show, just that he wants to do his best. Of most importance to the actor, however, is the representation his appearance brings to the LGBTQ community.

“For me, in my living room, when I dance at home, I dance with a man,” said Fauerby. “When I was a child, I never saw representation. We’re just one couple out of 160 in 16 years. So for me if a young boy, girl, or trans person has the opportunity to see that positive representation as part of a TV show that is empowering in itself.

Much of the early criticism hurled at the news centered on a fear of sexualization of the competition. It is a fear Fauerby hopes has been dashed since his debut.

The representation Fauerby has striven to showcase has also extended beyond the stage and into his family life. Just over two weeks ago, he and his husband Anders, together with their good friend Rebecca, welcomed to the world a new baby girl.

In fact, she arrived on a Friday night, which is when the show airs live. He, Anders, and Rebecca had been musing for several months about what might happen if she decided to come on a show night. After his daughter was born, he traveled to the studio to prepare for the show.

“I missed the rehearsal, arrived an hour before the show started, did a quick press conference, then got into makeup and danced the show,” he said. “We are a rainbow family, and it’s been overwhelming and amazing.”

At 42, Fauerby says one thing about this opportunity that he has found most incredible is the privilege he has to learn dance from a professional dancer.

“To learn something that you weren’t able to do before is an enormous privilege,” said Fauerby. “For several hours a day, one of the best dancers, not only in Denmark, but in the world is teaching me how to dance and that is just amazing.”

Fauerby also credits the platform the show has given him to take a stand for LGBTQ rights and visibility. The privilege to do so is not lost on him, and he has taken every opportunity he’s been given to make sure that voice is heard.

“Having this tremendous power to have access to speech, the privilege of having a voice is something I take very seriously,” he said. “And something has changed. We were standing at the Royal Theater with more than a million people watching us at home dancing the rumba. That has not been done before in Denmark.”

As for LGBTQ people outside of Denmark, Fauerby hopes that they see his participation on the show and understand just why visibility is so important and that they act.

“LGBTQ people with resources, access, and courage should know that representation is so important. That’s easy for me to say because I live in a rich country, in a democracy that works, with legislation that works, where women’s rights are in place, where gay rights are in place,” said Fauerby. “We have a lot of fights here, especially regarding transgender people, but the legislation is there. So I’m privileged, but I cannot tell someone in Saudi Arabia to go out and fight.”

“So if you live in a place where your safety isn’t jeopardized, then please go out and be visible. Show the world that being you is okay.”

Jakob Fauerby and Silas Holst will compete this in week nine of the show, which airs Friday nights at 8 p.m. on Denmark’s TV2