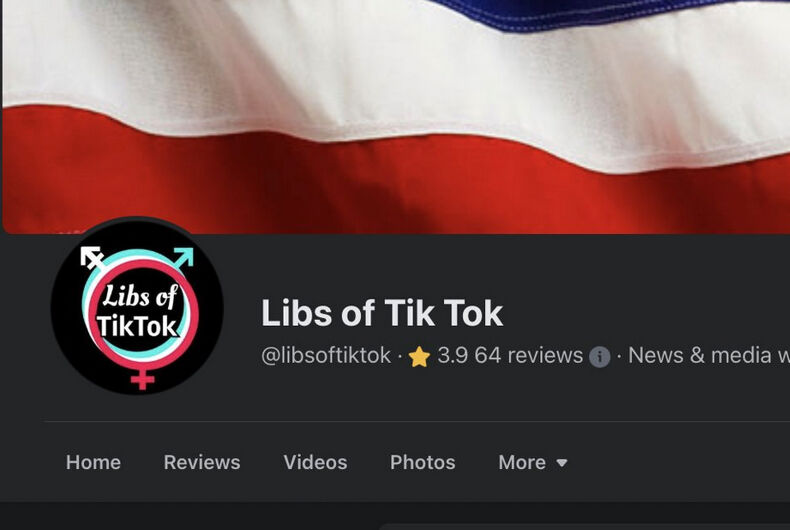 Anti-LGBTQ social media personality and Brooklyn real estate agent Chaya Raichik – who goes by “Libs of TikTok” on social media – has been banned from Facebook.

“They suspended our account and we immediately appealed. Within 2 minutes they answered that we’re suspended for good. I’m sure we totally got a full and fair review,” read one tweet.

“Our page is back up on Facebook but we are still locked out and were last told that it’s permanent. Perhaps it was just an ‘error,’” read a subsequent tweet.

As of Thursday morning, the Libs of TikTok page is still visible on the platform.

The Facebook ban follows a misinformation campaign by Libs of TikTok targeting Boston Children’s Hospital. On August 11, Raichik reposted the “expose” by Christina Buttons for the right-wing site Post Millennial, sponsored by conspiracy theorist Mike Lindell, the CEO of My Pillow. The “special report” consists of videos publicly available on Boston Children’s website along with commentary insinuating that children as young as two or three were getting gender-affirming surgery.

Fact-checking site PolitiFact later debunked the claims. Patients qualifying for gender-reaffirming surgery must be at least 18-years-old and have a “persistent, well-documented, gender dysphoria,” according to the hospital’s website. “All genital surgeries are only performed on patients age 18 and older.”

In the week since Raichik’s tweet, Boston Children’s Hospital physicians have been inundated with death threats and harassing calls and emails. Doctors featured in YouTube videos posted by the hospital have been targeted by anti-transgender activists with harassment on their personal and professional social media profiles.

Earlier this week, the hospital’s public relations office sent an email to employees detailing new guidance on responding to harassment and threats, citing an “increase of threatening and aggressive” phone calls and emails sent to the hospital commenting on treatment of transgender patients.”

In the last 5 days, Libs of Tiktok has tweeted and retweeted 14 posts about Boston Children's Hospital. As a result, BCH providers are being inundated in death threats and harassing calls and emails. It's now affecting their services. This is stochastic terrorism, full stop. pic.twitter.com/CEMlRsX6S4

“We are deeply concerned by these attacks on our clinicians and staff fueled by misinformation and a lack of understanding and respect for our transgender community,” the hospital said in a statement.

Raichik has become influential on the far right for spreading misinformation about the LGBTQ community, including frequent accusations of “grooming.”

NBC News reports that Twitter is looking into her harassment campaign.