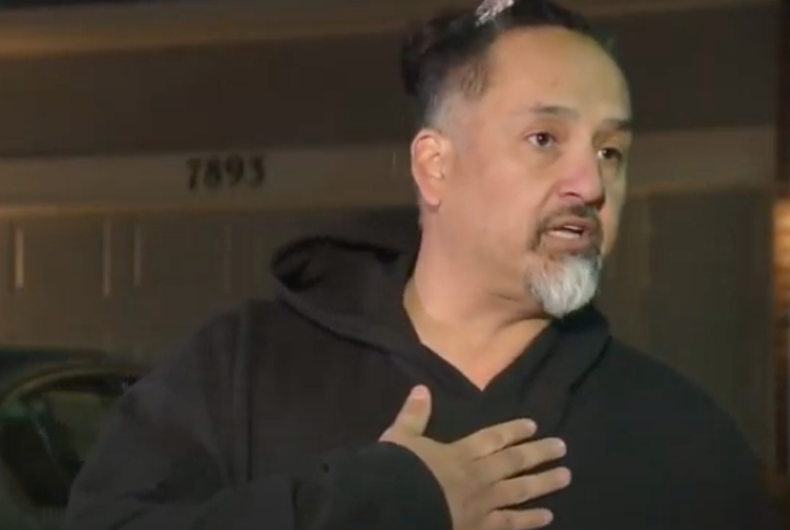 Richard Fierro — a straight, 15-year Iraq and Afghanistan military veteran — tackled the Club Q gunman and beat him bloody with his own handgun while another patron – identified as either a drag queen or a transgender woman – stomped her high heels into the gunman’s body.

By the time police came, the shooter’s body was motionless. Fierro worried that they’d killed him… but they hadn’t.

Fierro, 45, told The New York Times that he, his wife Jess, their daughter Kassandra, her boyfriend Raymond Vance, and two family friends went to the club to watch his daughter’s high school friends perform in a drag show.

As a former combat veteran, Fierro had been shot at, witnessed vehicle bombings, and lost friends. The resulting PTSD made him distrustful, quick to anger, anxious around crowds, and always anticipating an attack — something he took meds and saw a psychologist for.

While enjoying the show, he heard quick bursts of small-arms fire coming from the front door and instinctively pulled himself and his friends onto the floor — that’s when he saw the gunman following patrons who’d fled to the bar’s patio.

He ran across the room and pulled the gunman down by the handle on the back of his body armor. The rifle fell out of the shooter’s reach. When he grabbed his handgun, Fierro grabbed it and started smashing it repeatedly into the shooter’s skull while screaming expletives.

“I don’t know exactly what I did, I just went into combat mode,” he told the aforementioned publication. “I just know I have to kill this guy before he kills us.”

Barking orders, he instructed a patron to grab the rifle and start kicking the gunman in the face. He ordered her to start stomping on the shooter’s body with her high heels.

When police arrived a few minutes later, the gunman was totally motionless.

Fierro began yelling to get medical assistance for the other injured people while he put tourniquets on his own bleeding friends. When he began walking towards his wife and daughter, covered in blood and holding a gun, police mistook him for a possible threat, tackled him, handcuffed him, and put him in a patrol car for over an hour.

He screamed and begged officers to let him see his family. He was eventually released and immediately visited his wife and daughter in the hospital where they got treatment for minor injuries. After leaving the hospital, they went back to the bar to search for his daughter’s boyfriend Raymond Vance.

He later held his daughter and cried when they heard that Vance was one of the five people the shooter killed. The others were Ashley Paugh, Derrick Rump, and two transgender individuals, Daniel Aston and Kelly Loving.

For his heroism, the League of United Latin American Citizens (LULAC) awarded Fierro the LULAC Presidential Medal, the group’s highest honor, as well as a $5,000 reward.

“LULAC reminds America that fear-mongering leads to these types of deadly attacks but thank God we have American heroes like Rich Fierro,” LULAC National President Domingo Garcia said. “[He] exemplifies what our Latino servicemembers and veterans do in the face of danger, even when it means putting their own lives on the line.”

Fierro said in an interview that he and his daughter are straight, but they both go to the Pride parade and the bar because they love their community.