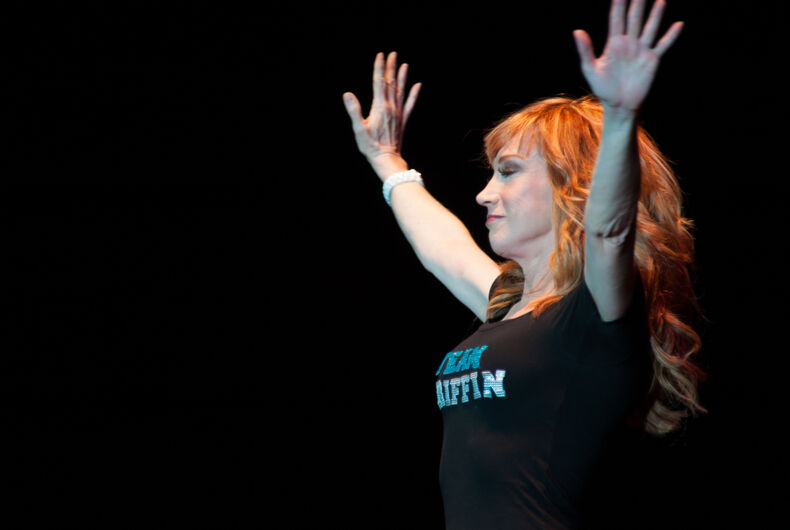 With only four words, Griffin demolished the bombastic far-right congresswoman.

It started when Griffin shared video of right-wing troll Alex Stein harassing a female Vice reporter at the CPAC convention. Stein is known for pulling stunts meant to get a rise out of politicians and celebrities; he sexually harassed Rep. Alexandria Ocasio-Cortez on the Capitol steps and filmed it for his fans.

Stein stalked reporter Tess Owan through the convention, repeatedly calling her a “loser” and accusing her of lying about conservatives. He mocked her for wearing a mask.

Griffin shared the video of his boorish behavior, tweeting, “The misogyny with this crowd is just as pervasive as the racism.” She also mistakenly identified him as Tucker Carlson’s son, an identifier that Stein has given himself despite not being related to Carlson at all.

This is Tucker Carlson‘s son. The misogyny with this crowd is just as pervasive as the racism. https://t.co/zEbxm6vdyS

Greene decided to hop in on the attention, piggybacking off of Griffin’s tweet and sharing the infamous photo of Griffin holding a Trump mask with ketchup on it that got the comedian canceled by the right.

“This is Kathy Griffin holding a severed head of the 45th President of the United States,” Greene tweeted despite the former president very much still possessing his head.

“She’s calling Alex Stein misogynist & racist for simply treating a hard leftist reporter the same way they treat people on the right. Except he did it to her face with facts and no mask.”

Griffin, who reportedly has “no f**ks left to give,” quickly shot back despite Greene’s failure to tag her in the post.

“Use my handle, traitor.”

Use my handle, traitor.

Stein opposes letting kids interact with drag queens because he believes that straight boys will get turned on by drag queens and end up “sexually confused,” he said in a debate with YouTuber Vaush.

Stein recently appeared on Green’s podcast where he justified racially catcalling Ocasio-Cortez at her place of work. He called her his “favorite big booty Latina” and said she is “hot hot hot like a tamale.”

“You’re a comedian, you’re doing what you do, saying things that are actually quite the compliment,” Greene said, bringing up the video.

“I was complimenting! She’s Jenny from the Block! I mean, J. Lo is known for her voluptuous derrière, and all I was trying to do is say you look great,” Stein said. “But they live in a society where compliments are bigotry.”

“But how we feel in our culture,” Greene said, “where we believe in, um, you know, two genders – male, female… I think women should be confident. If a man gives you a compliment, a woman can say thank you. That’s a good thing, say thank you.”

Here is a video he posted of the incident. I was actually walking over to deck him because if no one will protect us then I’ll do it myself but I needed to catch a vote more than a case today pic.twitter.com/RdwCNBDIBb

Young donors can change the Democratic party. Does the party want to listen?