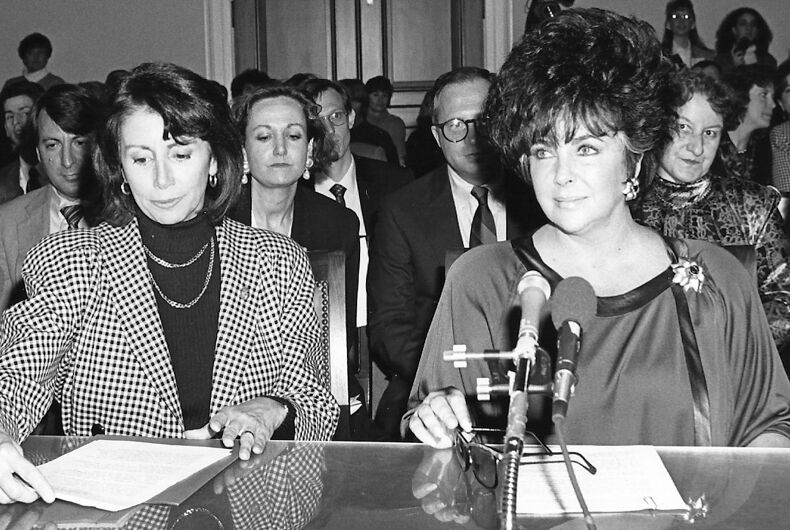 From left to right, Nancy Pelosi and Elizabeth Taylor testify in a House hearing on HIV funding in March 1990.Photo: Nancy Pelosi/Wikimedia Commons

On Thursday, 82-year-old House Speaker Nancy Pelosi (D) that she’ll step down next year from her congressional leadership role to make room for a younger generation.

Pelosi has led the House Democrats since 2003 and made history in 2007 when she became the first woman ever to serve as House Speaker. But throughout her political career, Pelosi has also been a strong advocate for the LGBTQ community. Here are five times in her tenure when she stood out as a vital political ally.

1. She was an early HIV advocate at a time when few politicians were

In her first House floor speech — delivered June 9, 1987 — Pelosi said she had come to Congress to fight the AIDS epidemic.  “Now we must take leadership, of course, in the crisis of AIDS. And I look forward to working with you on that,” she said, speaking to then-President Ronald Reagan (R).

The comment was particularly critical, seeing as Reagan had barely mentioned AIDS for the first time ever only two years earlier, despite the fact that nearly 10,000 Americans had died of it since the epidemic’s start.

Pelosi went on to continually fight for increased HIV/AIDS funding for research and treatment, even testifying alongside celebrity advocate Elizabeth Taylor during a March 1990 House hearing. Pelosi helped secure additional funding under the Ryan White CARE (Comprehensive AIDS Resources Emergency) Act and made sure that insurers would cover HIV-positive “pre-existing conditions” when the Affordable Care Act passed in 2010.

2. She was an advocate for marriage equality over a decade before a Democratic president would be

In 1996, Pelosi was a leading voice against the passage of the so-called “Defense of Marriage Act” (DOMA).

“I rise in strong opposition to this ill-named ‘Defense of Marriage Act’ and I do so on the basis of conscience, Constitution and constituency,” she said, joining a number of Democrats who publicly opposed the bill.

Nearly 16 years later, she was also the first nationally elected leader to call for the inclusion of a marriage equality plank in the 2012 Democratic National Convention platform. It was at a time when Republicans were still using same-sex marriage as a wedge issue to mobilize religious voters against loving same-sex relationships.

3. She oversaw the passage of the first two major LGBTQ equality bills

That same year, amid a wave of anti-LGBTQ bully-cides among queer students, she also published an “It Gets Better” video encouraging queer youth to remain hopeful for their futures.

4. She stood up to Donald Trump’s attacks on transgender rights

Not only did Speaker Pelosi hang a trans flag outside her office in 2019, joining other congressional lawmakers who did so to show solidarity despite then-President Donald Trump’s repeated attacks on the community. She also unequivocally said that she supported trans students participating in school sports as their authentic selves when asked about it in 2020.

5. She got the House to support LGBTQ rights time and time again even when the Senate wouldn’t cooperate

Under Pelosi’s recent leadership, the Democratic-led House passed the Global Respect Act which would prohibit those who have committed LGBTQ human rights abuses abroad from obtaining a visa to enter the United States. She also oversaw the House passage of the Equality Act, which would include gender identity and sexual orientation to federal non-discrimination protections, as well as the House passage of the Respect for Marriage Act, which would require all states and the federal government to recognize same-sex marriages that occurred in other U.S. states.

“By moving forward on the Equality Act to ensure that every LGBT American can work, love, and live free from discrimination, violence, and bigotry, we can strengthen our democracy and create a better future for all people,” Pelosi said.

Amid all of these accomplishments, she also found time to appear as a guest judge on RuPaul’s Drag Race All Stars 7, one of the most queer-inclusive reality TV programs of all time.

Respect for Marriage Act delayed until after Thanksgiving break in Senate