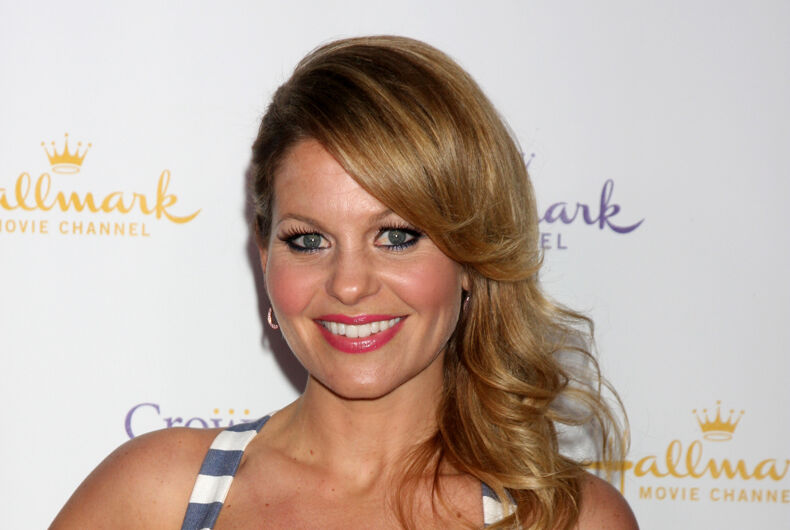 Candace Cameron Bure is responding to media coverage of her comments regarding LGBTQ representation in her new network’s programming.

Bure is the chief creative officer for the Great American Family Channel, having left the Hallmark Channel last year. In a Wall Street Journal profile published earlier this week, journalist Ellen Gamerman wrote that when she asked Bure whether she expects Great American Family to feature same-sex couples as leads in its holiday content, the Full House star “said no.”

“I think that Great American Family will keep traditional marriage at the core,” Bure is quoted as saying.

Bure’s comments come as Hallmark, where she starred in over two dozen made-for-TV Christmas movies, is set to premiere its first holiday movie centered on a gay couple. In recent years, the network had been criticized for the lack of diversity in its holiday programming. Given Bure’s departure from the network just as it seemed to be embracing diversity, media outlets took note of what she had to say about Great American Family’s focus on “traditional marriage.”

Now, Bure is accusing the media of fanning “flames of conflict and hate” by reporting on her quote.

“I would like to address my comments on Great American Family’s programming as reported in The Wall Street Journal,” Bure wrote in a long Instagram post on Wednesday. “All of you who know me, know beyond question that I have great love and affection for all people. It absolutely breaks my heart that anyone would ever think I intentionally would want to offend and hurt anyone.”

She goes on to blame “the toxic climate in our culture right now” on the media “seeking to divide us,” concluding that “We need Christmas more than ever.”

“I am a devoted Christian. Which means that I believe that every human being bears the image of God,” Bure explains. “Because of that, I am called to love all people, and I do. If you know me, you know that I am a person who loves fiercely and indiscriminately. My heart yearns to build bridges and bring people one step closer to God, to love others well, and to simply be a reflection of God’s huge love for all of us.”

She also goes on to imply that Gamerman quoted her selectively in the Wall Street Journal story. “I had also expressed in my interview, which was not included, that people of all ethnicities and identities have and will continue to contribute to the network in great ways both in front of and behind the camera, which I encourage and fully support.”

Employing marginalized people is far from the same thing as having their best interests at heart.