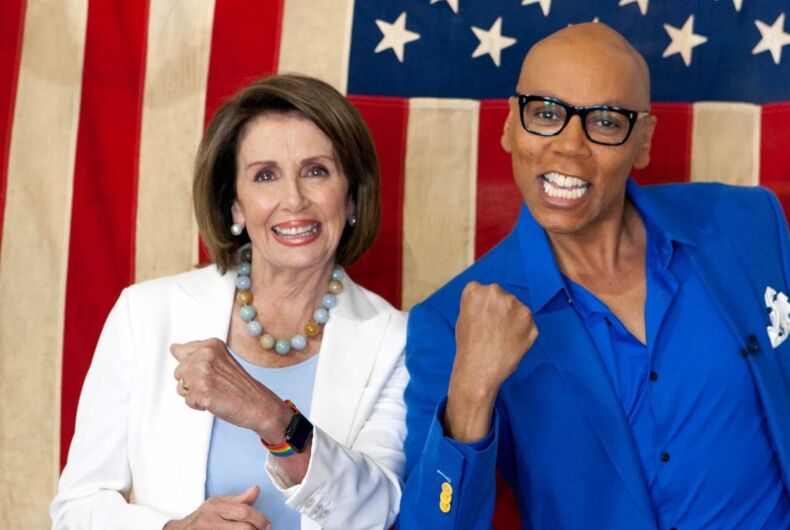 House Minority Leader Nancy Pelosi will be a guest judge on this week’s episode of RuPaul’s Drag Race and photos of the two superstars together are starting to hit the web.

A spokesperson for Pelosi told the Washington Post that her support of LGBTQ equality is one of the reasons she wanted to guest judge on the show, “to show solidarity in the face of… attacks against LGBT people by the Trump administration.”

She is also a fan of the show itself, according to the spokesperson.

Season 3 was filmed in July and August of 2017, but Pelosi hasn’t talked about her appearance beyond saying that it was “fabulous.”

All I can say is, you betta werk! Had a fabulous time with @RuPaul and good luck to all the queens. #DragRace https://t.co/ZrJDyDmuVh

The congresswoman will be an unusual guest judge for the reality franchise, which usually has people who work in show business or fashion judging the queens. But the stars of stage and screen aren’t the only people who have an eye for appearances, and politics is filled with its own sort of dramatic performances.

The episode airs on Thursday night on VH1 at 8pm Eastern.

Had a fabulous time on set with the Queens! Tune-in Thursday at 8/7c on @VH1 to catch me on the new #DragRace episode! #AllStars3 @RuPaul @RuPaulsDragRace pic.twitter.com/MHI3qvHxN2