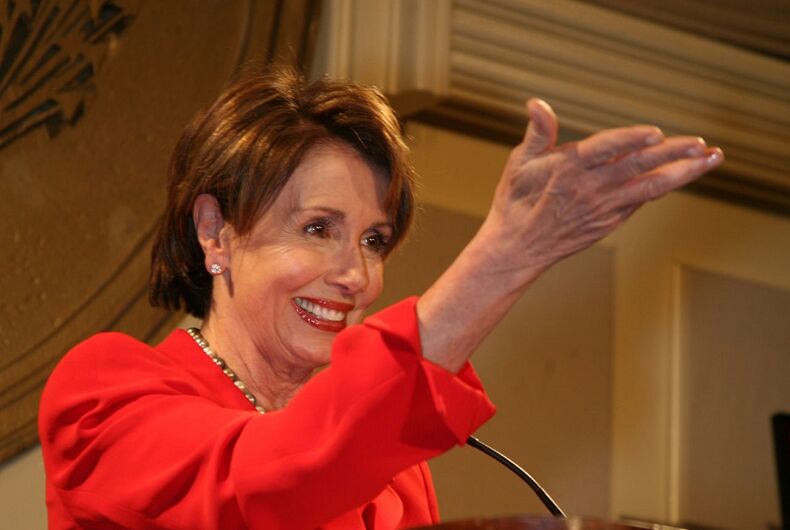 On Twitter, RuPaul announced that House Minority Leader Nancy Pelosi (D-CA) will be a guest judge on season 3 of RuPaul’s Drag Race: All Stars.

Pelosi’s district includes San Francisco, and she has been a longtime supporter of LGBTQ equality. For years, she has earned a score of 100 on HRC’s Legislative Scorecard. As Speaker of the House from 2007 to 2011, her support was key to passing LGBT legislation like the Matthew Shepard Act and the repeal of Don’t Ask, Don’t Tell.

She even voted against the Defense of Marriage Act in 1996, at a time when Democrats were generally not that great on LGBTQ issues.

A spokesperson for Pelosi told the Washington Post that her support of LGBTQ equality is one of the reasons she wanted to guest judge on RPDR, “to show solidarity in the face… attacks against LGBT people by the Trump administration.”

She is also a fan of the show itself, according to the spokesperson.

The U.S. Representative will be an unusual guest judge for the reality franchise, which usually has people who work in show business or fashion judging the queens. But the stars of stage and screen aren’t the only people who have an eye for appearances, and politics is filled with its own sort of dramatic performances.

Also, this isn’t the first time Pelosi has judged a reality TV show. In 2010, she appeared as a guest judge on season 7 of Bravo’s Top Chef, where she deemed the losing team’s fish too salty.

Season 3 was filmed in July and August of 2017, but Pelosi hasn’t talked about her appearance beyond saying that it was “fabulous.”

All I can say is, you betta werk! Had a fabulous time with @RuPaul and good luck to all the queens. #DragRace https://t.co/ZrJDyDmuVh

The season is set to premiere on January 25 on VH1.