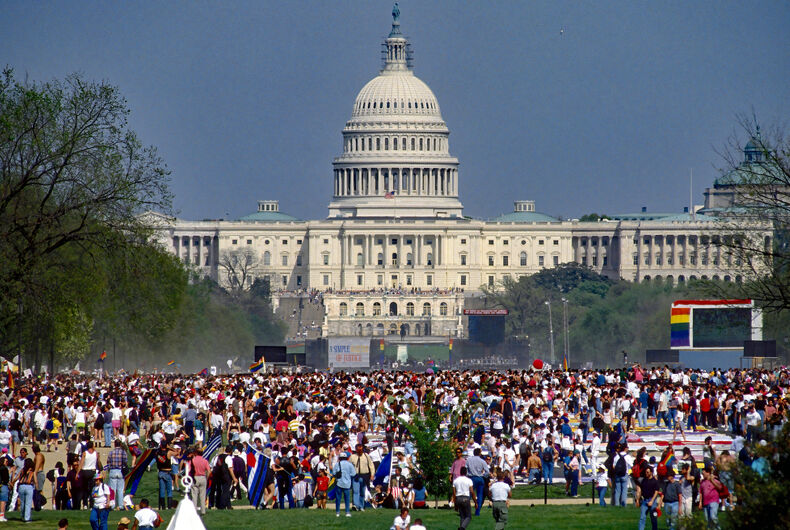 Washington DC, USA, April 25, 1993 Hundreds of thousands of LGBT people marched past the White House to listen to speakers at the CapitolPhoto: Shutterstock

The House of Representatives just voted to pass the Equality Act, a landmark piece of LGBTQ rights legislation, in a 206-224 vote.

All Democrats in the House voted for the Equality Act, along with three Republicans: Reps. Brian Fitzpatrick (PA), John Katko (NY), and Tom Reed (NY). All other Republicans voted against it.

The Equality Act would add sexual orientation and gender identity to existing federal civil rights legislation, banning discrimination against LGBTQ people on the job, in public accommodations, in housing, and in other areas. It would also expand the definition of public accommodations banned from discriminating against all categories of people under federal law.

Courts and the Biden administration have already enacted some of these protections, but passing a law through Congress would expand them and make them harder to roll back.

“The harsh reality is that current anti-discrimination protections fall far short of protecting everyone in our communities, leaving behind LGBTQ people and people of color who continue to face disproportionate discrimination in nearly every aspect of their lives,” said Imani Rupert-Gordon, executive director of the National Center for Lesbian Rights. “The Equality Act builds on the important legacy of the Civil Rights Act of 1964 and would provide nondiscrimination protections that include LGBTQ people for the very first time, while also extending protections to the most underrepresented in our communities in housing, healthcare, education, and other vital parts of everyday life.”

“GLSEN’s research has shown that more than half of LGBTQ+ students report discriminatory policies at their school, and overwhelmingly, schools are not safe for LGBTQ+ youth,” said Melanie Willingham-Jaggers of GLSEN, an LGBTQ organization for students. “This is especially true for transgender youth, LGBTQ+ youth of color, LGBTQ+ youth with disabilities and all LGBTQ+ youth living in communities that lack nondiscrimination protections.”

“We need more than a varied patchwork of rules and resources – a student’s zip code shouldn’t determine if they are protected or not.”

“The Equality Act offers essential protections to patients who are queer and trans because gender and sexuality-based discrimination harms people’s health,” said Dr. Colt Wasserman of Physicians for Reproductive Health. “Federal law addressing systemic inequalities faced by LGBTQIA people is an acknowledgment that our civil rights should be consistent across state lines.”

Signing the Equality Act into law was a key promise made by the Biden/Harris campaign to LGBTQ voters, and the White House has said that Biden intends to keep that promise.

The Equality Act has been introduced in every session of Congress since 2015. In 2019, the House of Representatives passed the bill for the first time, but the Republican-controlled Senate did not bring it up for a vote. Former President Donald Trump opposed the bill, saying that it would “threaten to undermine parental and conscience rights.”

The bill faces an uphill battle in the Senate, where, according to its current rules, 60 votes are necessary to end debate and hold a vote on the bill itself. There are only 50 Democrats in the Senate, which means that at least 10 Republicans would have to vote for it, but several moderate Republicans have already indicated that they will not support the Equality Act.

“It’s now up to the Senate to help President Biden keep his word. We urge Senators to pass this legislation quickly and send it to his desk for his signature without delay. The LGBTQ community has been denied the basic dignity and respect the Equality Act would provide for far too long,” added Jerame Davis, Executive Director of Pride At Work, an organization for LGBTQ working people.

"To be poor, Black, and gay in this country is to feel unseen… today, we send a powerful message to millions of LGBTQ people in this country and around the world that they are seen… and their lives are worthy of being protected."

What kind of Big Bear person are you? Let’s get on the road & find out.