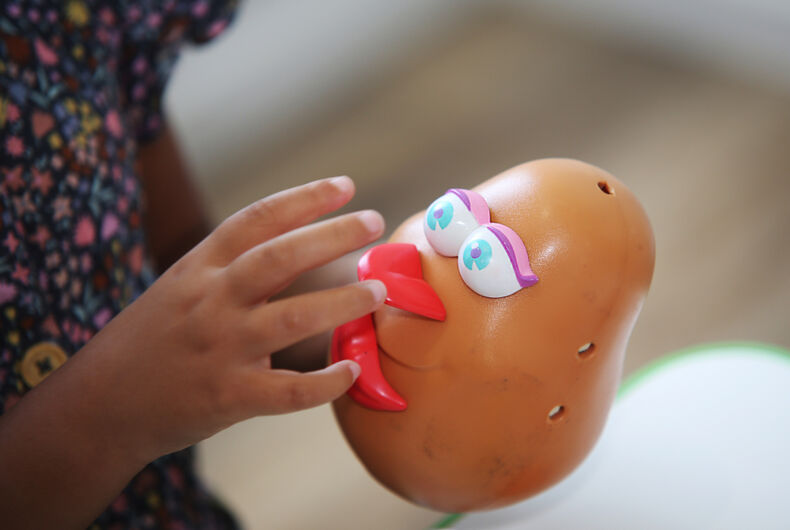 UPDATE: Hasbro has clarified that the Mr. and Mrs. Potato Head characters will still be available and that the brand name will become “Potato Head” instead of “Mr. Potato Head.”

BUT I'VE ALREADY BURNT ALL MY MR POTATO HEAD MERCHANDISE

Toymaker Hasbro has announced that Mr. Potato Head is going gender-neutral by dropping the “Mr.” and conservatives are flipping out.

The decades-old popular toy – previously divided between Mr. and Mrs. Potato Head dolls – is a plastic tuber with plug-in body parts. None of them are genitalia.

“It’s a potato,” Ali Mierzejewski, editor in chief at toy review site The Toy Insider, told the AP in a brilliant use of understatement.

Mierzejewski notes that “kids like to see themselves in the toys they are playing with” and Potato Head is simply joining other toys that are shedding unnecessary gender labels or diversifying the toy lines. Mattel released Creatable World, a gender-neutral doll line, last year.

“By offering a toy that exists outside of the binary of male and female,” Rich Ferraro, GLAAD’s Chief Communications Officer, tells LGBTQ Nation, “Hasbro is helping kids to simply see toys as toys, which encourages them to be their authentic selves outside of the pressures of traditional gender norms.”

Conservatives, however, are apparently keenly invested in the toy for kindergartners and their moral outrage over a piece of lumpy brown plastic has LGBTQ people laughing. Twitter has lit up with hilarious mockery of the rightwingers perturbed over a plastic potato.

since everything is as stupid as possible here you go pic.twitter.com/N1EKfbnNIJ

"I grew up playing with Mr. Potato Head for a week 30 years ago, and my whole penis identity is inextricably linked to him 😡"

I told my 7-year-old daughter that Mr. Potato Head is gender neutral now and she smiled and said, "This is the greatest day of my life. Finally I can be at peace." We hugged and I started sobbing. It was so beautiful.

The Operation patient hasn't had genitals for decades and nobody gave a shit about them. pic.twitter.com/KsmXHMuvY1

This Potato erasure will not stand 😤 https://t.co/xgrvY8Td8T

Conservatives: Everyone on the left is such a sensitive snowflake!

Why aren’t people talking more about the dramatic rise in hate crimes against Asian Americans?