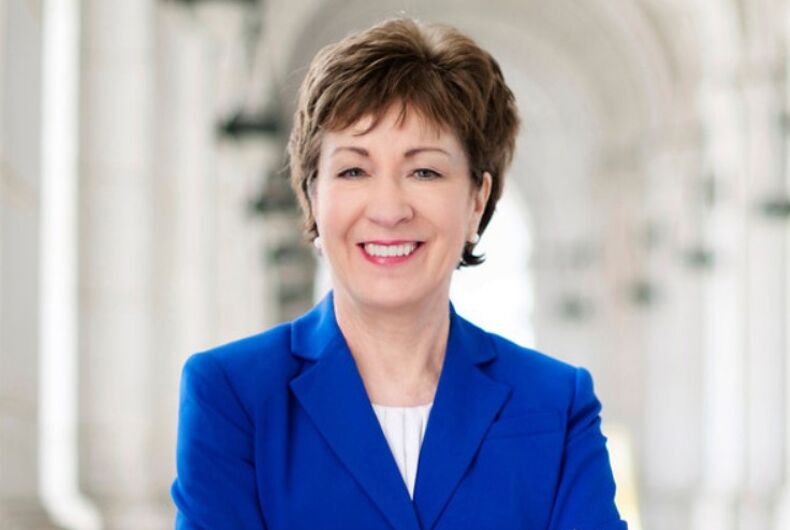 The Equality Act is facing another obstacle in the Senate as Sen. Susan Collins (R-ME) refused to co-sponsor the bill and won’t even say why.

Collins is seen as a moderate Republican, and the bill will need some Republican support to pass in the Senate. Given her past history of general support for LGBTQ rights, losing Collins’s vote could spell trouble for the game-changing LGBTQ bill.

Speaking to a Washington Blade reporter, Collins said that she would not co-sponsor the legislation, which would add sexual orientation and gender identity to existing federal civil rights legislation.

“There were certain provisions of the Equality Act which needed revision,” she said. She did not say what those revisions were, but other Republicans have been saying that the bill needs to include a loophole for Christians who want to discriminate against LGBTQ people.

“Unfortunately the commitments that were made to me were not [given] last year,” she added. The Blade believes this is a reference to the LGBTQ organization HRC, which did not endorse her during her 2020 reelection campaign.

“I’m a strong believer in LGBTQ rights,” she concluded before she got on an elevator.

Her lack of support for the bill could spell trouble. There are currently 50 Democrats and 50 Republicans in the Senate, and 60 votes are required to end debate on a bill before the Senate can vote on it, according to the Senate’s current rules. Unless the rules are changed – which there is not currently enough support for – 10 Republicans will need to vote to end debate on the Equality Act before it can be passed.

Sen. Mitt Romney (R-UT) has also said that he will oppose the bill because he wanted “strong religious liberty protections.”

The Equality Act doesn’t ban anyone from holding whatever beliefs on LGBTQ people that they want, and it doesn’t require churches or other religious organizations to hire LGBTQ people as clergy. What the Republicans are referring to is that businesses and nonprofits – e.g., Hobby Lobby or a Catholic adoption agency that receives federal money – won’t be able to use Christianity as an excuse to discriminate against LGBTQ people in certain circumstances if the bill passes.

The Blade also tried to talk to other Republican senators about the bill. Both Sens. Joni Ernst (R-IA) and Marco Rubio (R-FL) refused to go on the record with a position on the bill.

Collins is also voting against President Joe Biden’s nominee for director of the Office of Management and Budget, Neera Tanden, in part because Tanden once called Collins “the worst.”

The Equality Act would add protections against discrimination based on sex for public accommodations and federal programs to the Civil Rights Act of 1964, according to the Washington Blade. It also expands the definition of public accommodations to include retail stores, banks, transportation services, and health care services.

The bill would prevent the Religious Freedom Restoration Act from allowing people and businesses from claiming a religious exemption to the anti-discrimination law as well.

Signing the Equality Act into law was a key promise made by the Biden/Harris campaign to LGBTQ voters, and the White House has said that Biden intends to keep that promise.

The Equality Act has been introduced in every session of Congress since 2015. In 2019, the House of Representatives passed the bill for the first time, but the Republican-controlled Senate did not bring it up for a vote. Former President Donald Trump opposed the bill, saying that it would “threaten to undermine parental and conscience rights.”