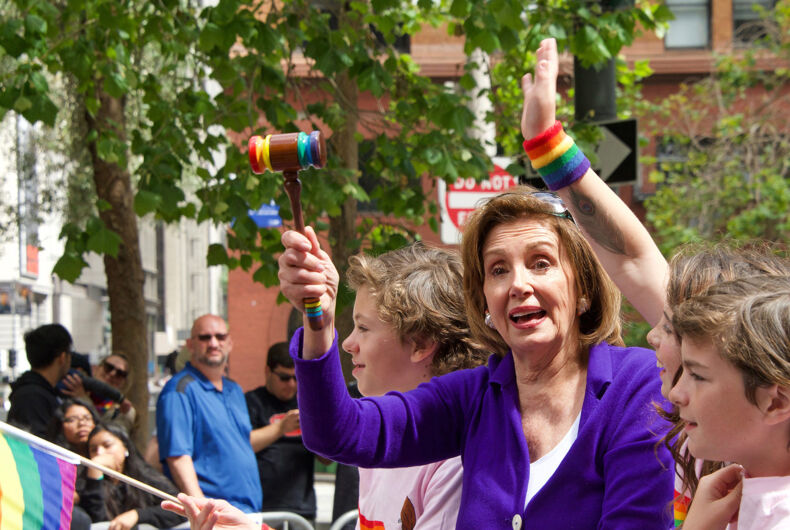 House Speaker Nancy Pelosi (D-CA) was asked at a press conference if she would support measures by President-elect Joe Biden that would allow transgender children to participate in activities as their gender identity, and if she would “agree” with doing so.

“Yes,” she said without hesitation.

The question was apparently posed by a Lucy Collins, a Capitol Hill-reporting intern from CNSNews.com, formerly known as the Conservative News Service. The news wire reports on conservative Christian or hate group organizations, such as the Family Research Council, in Washington.

“Joe Biden says that on his first day in office, he’ll use Title IX to give transgender students access to sports, bathrooms, and locker rooms in accordance to their gender identity in all federally funded schools,” Collins asked. “Does he have the power to unilaterally do this, and do you agree with it?”

“Yes, and I think he does,” Pelosi responded before moving to the next question.

Collins’ question, nor Pelosi’s response, specifically made mention of transgender ‘women’ or ‘girls’, or an ‘order’ to ‘force’ schools and colleges to have trans students participate, proposed by Pelosi, Biden, or anyone.

Yet, in her filed story published by CNSNews.com, she attempted to frame Pelosi’s answer as solely trying to force adult “trans women” into “girls’… locker rooms,” alluding to the transphobic trope that trans people pose a danger to cis people or children in private areas.

“[Pelosi] agreed with Joe Biden’s plan to force public schools and colleges to let transgender ‘women’ (biological males) play on girls’ sports teams and use their bathrooms and locker rooms,” Collins wrote in a report entitled “Pelosi Says ‘Yes’ to Biden Plan to Order Schools to Let Transgenders Play on Girls’ Teams and Use Their Locker Rooms.”

Collins’ story cites a paragraph on Joe Biden’s website, under their LGBTQ policy, as an “order.” The excerpt states that the Biden administration plans to “reinstate the Obama-Biden guidance,” which simply allows trans students to have “access to sports, bathrooms, and locker rooms in accordance with their gender identity.” The guidance, among other regulatory guides, was erased when Donald Trump took office in 2017.

Further, the excerpt says that Biden “will direct his Department of Education to vigorously enforce and investigate violations of transgender students’ civil rights.”

The guidance was based on the fact that Title IX law holds that schools that receive federal funding cannot discriminate on the basis of sex. The Supreme Court, among other rulings in federal courts, found that the definition of “sex” includes gender identity in the Bostock v. Clayton County ruling. Thus, federally-funded schools could violate the law by refusing to allow trans students to take part in activities as they identify.

From that, Biden’s intention to publish guidance that will ensure government employees accurately follow the law is being framed as a “plan to force” an “order” across schools in conservative media.

Collins has been reported as representing the Christian News Service. Documents under the “Christian News Service” name were found in online searches, sharing material that lists “websites that promote therapy for homosexuals” and “pro-family websites for support and therapy,” such as the American Family Association and Focus on the Family, also designated as hate groups.

CNSNews.com was founded by the Media Research Center (MRC) in 1998 after they claim their data “clearly demonstrates a liberal bias in many news outlets.” The MRC boast quotes from conservative stalwarts Sean Hannity, Rush Limbaugh, and Mark Levin on their website.

The MRC also operates the conservative site NewsBusters, which is also dedicated to “combating liberal bias” from their viewpoint, which includes railing against celebrities and mocking commentators that supporting liberal policies, such as calling MSNBC’s Joy Reid “Joyless Potpourri.”

LGB adults are at a higher risk for heart disease. They may not be aware of how to prevent it.