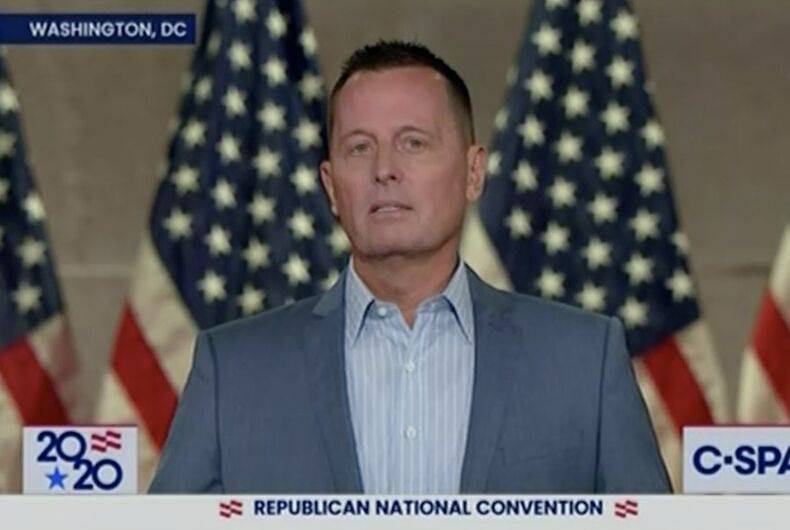 Richard Grenell, the former ambassador to Germany and acting Director of National Intelligence under President Donald Trump, has once again shown off his lack of knowledge via social media.

When Donald Trump Jr.’s positive COVID-19 test results became known, the man who became the first out cabinet-level official rushed to claim that the media was “announcing protected health information” in violation of the Health Insurance Portability and Accountability Act of 1996 (HIPAA). In fact, the information reported did not do so.

Grenell currently spends his time assisting in Trump’s attempt to invalidate ballots across key states that he’s lost, and as the Special Presidential Envoy for Serbia and Kosovo peace negotiations. When he’s not doing that, he’s regularly attacking the media on Twitter.

His latest attempt to do so backfired.

Grenell tweeted in response, “Reporters need to stop announcing protected health information. This is a violation of HIPAA rules.”

Reporters need to stop announcing protected health information. This is a violation of HIPAA rules. https://t.co/RGckMdo1CI

Media employees are not subject to HIPAA in their journalistic duties, however, and do not violate the rules set out by HIPAA by reporting available health information. Further, as many were quick to point out, a spokesperson for Trump Jr. had also confirmed the diagnosis.

Media reports fact-checked that HIPAA is to be followed by “covered entities,” such as health care providers, Medicaid and Medicare employees, or anyone contracted to such entities, like “medical billing companies, IT specialists, particularly those that work in healthcare, and companies that store and destroy medical records” – but that “does not include the media.”

“Didn’t realize I got a free medical degree when I became a journalist,” Forbes reporter Andrew Solender quipped.

When informed of this via a landslide of tweets, however, Grenell instead blamed those in media for his false statement and once again used the opportunity to attack journalists.

When NBC News correspondent Tom Winter pointed out that the “Former acting ODNI is unaware of how domestic law works,” Grenell snapped back that “[y]our industry is hated by the public because you justify disclosing someone’s personal health data,” again ignoring that Trump Jr.’s team had already publicly confirmed the information.

Your industry is hated by the public because you justify disclosing someone’s personal health data.

It was leaked. NBC got it from Bloomberg who had sources and called the spokesman.

Once considered “one of the top five Republican consultants in social media,” Grenell continued to double down, going further with tweet after tweet attempting to explain why he wasn’t wrong, or why he wasn’t wrong to say what he said.

“This is silly semantics…the spirit of the law is to protect people’s privacy,” he claimed. “Have some respect for privacy.”

“It is none of your business,” the former Intelligence Director tweeted further to Alexander.

This is silly semantics. Covered entities may not disclose personal data to the media.

But the media can get it from other sources, true. The spirit of the law is to protect people’s privacy.

lol. Because NBC got it from Bloomberg who was about to report it from other sources.

Be a human and respect people’s privacy. It is none of your business.

This is why the public finds your industry disgusting. https://t.co/SXl9dEM2wB

He retweeted a tweet by Sen. Rand Paul’s chief strategist, Doug Stafford, admitting Grenell was wrong but he was still right, in spirit: “congrats on your ‘fact check.'” Stafford further claimed that journalists were “all gross in their glee” by “leaking” the verified information of “a private citizen.”

Grenell even went as far to say that a correction of him by Nick Mercadante – a healthcare company CEO – “sounds like a threat.”

Needless to say, the endless petty responses did not help him save much face. This is also far from his first time embarrassing himself online, or skirting reporters, or refusing to admit he had made a false claim.

No you see, we are a healthcare practice. And therefore a Covered Entity. So HIPAA actually applies to us.

If you want to go toe to toe on bird law or something else, I’m game. But I’d recommend not doing it…on this. For your sake. https://t.co/MYAEZ8sZpZ

Listen buddy, you need to just take the L like a grown-up.

Always fun to watch @RichardGrenell melt down when proven wrong

It’s not silly semantics when what you said is false. Take the L.

Maybe tell his spokesman to not release his "medial records" then.

This gay man who’s allied himself presidents whose high court nominees are busy declaring that the first amendment protects conversation therapy has some thoughts about what humanity is. https://t.co/J4skJ6y25U

Would this apply to stories about Hunter Biden’s addiction issues! Or are Republicants the only ones who can determine who is fair game?

His own spokesperson announced it. That’s not a leak.