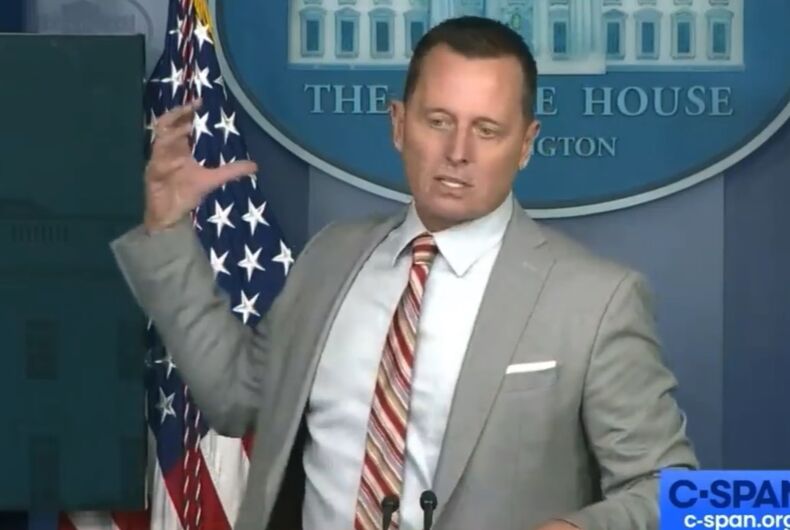 Gay GOP troll Richard Grenell was given a dose of his own medicine on Veterans Day when reporter Ken Klippenstein tricked him into sending well wishes to a war criminal on Twitter.

Grenell, who has a notoriously antagonistic history with the press, served as ambassador to Germany and as acting National Security Director in the Trump administration. After leaving, he led a quixotic campaign to gin up support for the anti-LGBTQ president in the queer community.

Grenell, who has regularly taunted the media on Twitter and prides himself on his grasp of international affairs and the military, was sent a flattering message by Klippenstein that asked him to wish “my grandpa” a happy Veterans Day.

The message included a black and white photo of former United States Army officer William Calley, a war criminal convicted by court-martial for the premeditated killings of unarmed villagers during the Vietnam War.  American soldiers took the lives of between 347 and 504 people in the My Lai Massacre.

“Thank you for your service, Bill Calley! #VeteransDay,” Grenell tweeted shortly after.

“Happy Veterans Day!” Klippenstein responded, sharing screenshots of the tweets, DMs, and a screenshot of the Wikipedia page for Calley. The first photo shown of him is the one sent to Grenell that he subsequently tweeted himself.

Podcaster Jason Bailey responded back on behalf of everyone, “Cry more, dumbfuck,” a reference to to U.S. Congressman-elect Madison Cawthorn’s (R-NC) words from earlier this week when he was announced the winner of his race: “Cry more, lib.”

While ambassador to Germany, Grenell was reportedly actively shunned by German government officials who found him rude and ignorant. His history as a Twitter troll almost cost him the confirmation he needed to be the ambassador.

Calley, who is still alive, did not respond back to the warm wishes from Grenell.

Duped. Trying to be helpful to people who reach out on Veteran’s Day.

It’s a shame people would do this on a day like today.

Your daily reminder that @RichardGrenell is a towering imbecile. https://t.co/vLtySAdqKd

Veteran’s Day should be a day to recognize that we are the home of the free because of the brave.

The sick jokes at the expense of our great Vets is disgusting. Truly disturbing. https://t.co/ZbwPdQOXpo