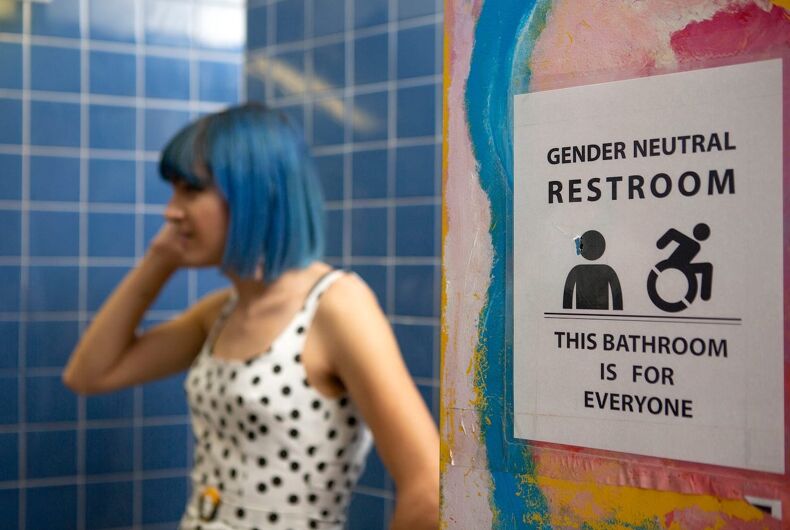 Restroom access is at the center of one recent Texas school board policy targeting transgender students.Photo: The Gender Spectrum Collection

The policies at the center of the complaint include one censoring books that discuss “gender fluidity” and another forcing trans students to use bathrooms that align with their sex assigned at birth rather than their gender.

“The effect of the [book] policy, absent federal civil rights intervention, will be to stigmatize LGBTQ+ and particularly transgender, non-binary, gender diverse, and intersex students in Keller ISD, to uniquely deprive them of the opportunity to read books that reflect their identities, and to create an environment in which unlawful discrimination flourishes,” the complaint states.

Among the more than 40 books removed by the school district in response to the new policy were The Bible, a graphic novel depiction of The Diary of Anne Frank, Alison Bechdel’s Fun Home: A Family Tragicomic, and Toni Morrison’s The Bluest Eye.

Opponents of the bathroom policy say that it would allow districts to ignore the gender listed on a student’s legal documents, including amended birth certificates.

“This policy seemingly allows Frisco ISD and its teachers and administrators to ignore and erase students’ gender identities in violation of federal law,” the complaint states. “School districts have no right to question students’ sexual characteristics such as genitalia, hormones, internal anatomy, or chromosomes.”

The ACLU of Texas is encouraging impacted students to reach out.

LGBTQIA+ young people know who they are. We will fight to make sure they are loved and supported.

If you or anyone you know is affected by these policies or face other issues in school, reach out to us and visit: https://t.co/b3pVWODUm1

According to the Texas Tribune, the complaints are just the latest filed by civil rights groups in opposition to anti-trans policies in Texas school districts. The NAACP Legal Defense and Educational Fund filed a similar complaint against the state’s Carroll Independent School District over concerns it failed to protect students from discrimination on the basis of sex, gender, and race.

In the Grapevine-Colleyville Independent School District, the school board recently adopted policies that effectively force teachers to deny the existence of transgender people. Its new guidelines prohibit discussion of “gender fluidity,” the use of gender-affirming pronouns, and the use of gender-congruent restrooms.

At the state level, Texas Republicans recently proposed creating a book rating system for school libraries. In a statement on the proposed legislation, PEN America called the system “a dangerous escalation in the movement to censor public education.”

In March, an investigation by the Texas Tribune and ProPublica exposed the explicitly anti-LGBTQ motives behind one Texas school district’s attempt to remove books from school shelves.

The policies are part of a national trend pushed forward by coordinated action from right-wing activist groups like Moms for Liberty. Similar book bans have been proposed or adopted in Michigan, Florida, South Carolina, and other states. Many states have likewise considered policies prohibiting trans students from using facilities that align with their gender, or otherwise restricting their rights.