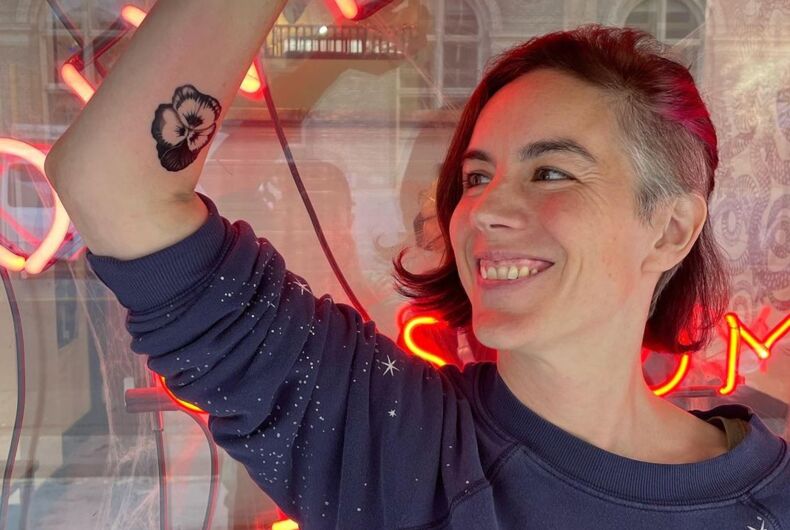 Spotting a Pride flag pin or a “Love Is Love” yard sign (or, say, a Lucy Dacus concert tee) can be reliable ways to identify LGBTQ folks and straight allies, but a new project in the Bay Area offers a more personal — and permanent — option.

The A Thousand Pansies tattoo project presents the pansy as a symbol of queer solidarity, joy, and support while raising funds for organizations that help trans people. Its creator is queer tattoo artist Cedre Csillagi, who co-owns Oakland’s Diving Swallow Tattoo with fellow tattoo artist Wolf.

Csillagi, who is nonbinary, lives in Oakland with their fiancée, stepson, and two cats. Originally from Texas, they explained transphobia and homophobia in their home state and others motivated them to start the project. “I was upset about the legislative attacks that were happening to trans people, queer people in the South … and I was racking my brain to figure out how to help my community — the queer community, and trans community, and the people hit the hardest, trans people of color.”

Once Csillagi decided to fundraise for trans organizations through tattoos, they had to create an appropriate image. After all, as they point out, “Not everyone wants to have a flag tattoo.”

Because Csillagi specializes in realistic botanical tattoos, a flower was a natural choice (no pun intended). They say the pansy stood out in particular because the project could reclaim the word “pansy” from its historical use as a slur for effeminate and gay men while also honoring the drag balls of the U.S. “Pansy Craze” of the 1930s. (Sixty years later, the band Pansy Division entered the rock scene; its members were out as gay men from the beginning, a rarity in the 1990s.)

A Thousand Pansies also echoes the name of a campaign in the UK called The Pansy Project, created by Paul Harfleet. Harfleet plants pansies to mark sites of homophobic incidents. “It felt that it was also a continuation of, or a nod to the work he’s already done, which is so beautiful,” says Csillagi, who notes that Harfleet was “thrilled” when they told him about A Thousand Pansies.

Once Csillagi had landed on a fitting symbol, they designated the first group to benefit: The Knights & Orchids Society (TKO) in Alabama. TKO, which Csillagi calls “amazing,” is one of the country’s only Black, trans-led healthcare organizations. “More money is always needed [in the Bay Area], and there are some orgs that still need help,” says Csillagi. “But choosing to work with an organization from the South was purposeful in that there is not enough money being funneled that way.”

TKO serves 75 to 100 people yearly from its locations in Montgomery and Selma, says Director of Community Engagement TC Caldwell. However, it helps trans folks throughout the South, prioritizing the Black trans community.

Caldwell says that A Thousand Pansies will help TKO continue its lifesaving work. “A Thousand Pansies is showing allies how to show up and help grassroots organizations like TKO. We don’t always have access to funders who could support our work due to being Black, trans, queer, and in the South.”

To get a pansy tattoo, participants must donate a minimum of $500 to TKO. (Outside of A Thousand Pansies, Csillagi’s first available appointments are in 2024.) In addition to the contributions required for tattoos, donations of any amount are accepted. Eventually, Csillagi plans to use this additional money for those who can’t afford to give $500 but would like their own pansy.

So far, Csillagi has tattooed 11 pansies (including one on themself), raising more than $5,000 for TKO. The pansy-bearers range from parents of trans kids to notable folks in the LGBTQ community, such as chef and activist Preeti Mistry and author and activist Mia Birdsong. When Piper Kerman, author of Orange Is the New Black, received hers, Bay Area station KQED was on site for an interview.

After they’ve received their pansy, each participant records a brief video with Csillagi. (You can see the videos on Instagram at @a1000pansies.) “Every person has a different story,” says Csillagi.

In Mistry’s post-tattoo video, Csillagi asks, “What does trans joy mean to you?” and Mistry responds, “Trans joy to me means being able to be yourself — not just be yourself but be able to be celebrated. I think that we live in a world where the idea of being tolerated is somehow enough, that some people in society only should be OK with just being tolerated, and … that is not where I want to be.”

A Thousand Pansies has just started, but Csillagi says that the goal is to spread 1,000 pansies by expanding the project beyond themself and the Bay Area. “Tattooers, makers, and artists joining in will be committing to doing this work with me, raising money for TKO and putting their skills to use on a community level, working to build a social justice movement that should have already been started,” they say.

Despite the project’s origin as a response to anti-LGBTQ legislation, Csillagi says they want A Thousand Pansies to focus on the positive. “I really want this project to be about joy and happiness, and not persecution and the awful things happening in the world.”