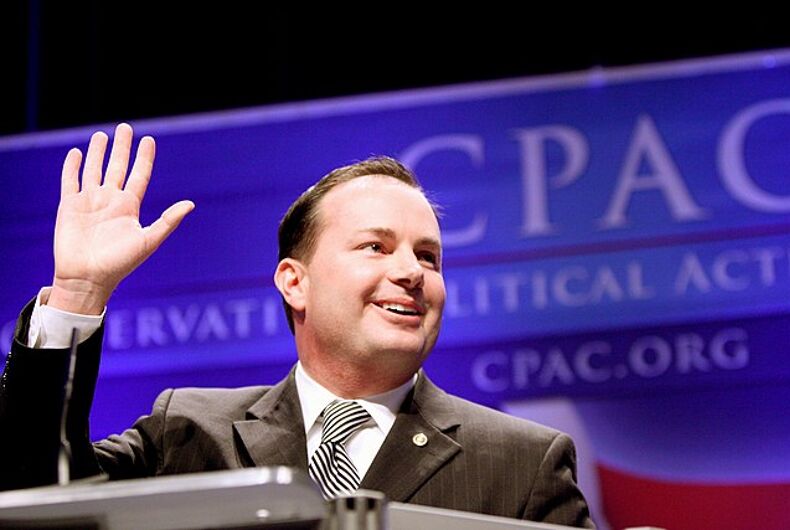 A group of 21 Republican senators has signed a letter urging their Republican colleagues to support an amendment that would help gut anti-discrimination protections in a bill requiring states to recognize same-sex marriages.

Earlier this month, 12 Republican senators voted to advance The Respect for Marriage Act. If the bill goes to a Senate floor vote, those senators would help ensure that it passes the filibuster and gets signed into law.

The bill would officially repeal the Defense of Marriage Act (DOMA), the 1996 law that forbade the federal government from legally recognizing same-sex marriages. In its place, the act would require the federal and state governments to recognize same-sex marriages as long as they occur in states where they are legal. If any state refuses to recognize such marriages, the act says, the spouses can sue.

However, Sen. Mike Lee (R-UT) has introduced an amendment that would “ensure that federal bureaucrats do not take discriminatory actions against individuals, organizations, nonprofits, and other entities based on their sincerely held religious beliefs or moral convictions about marriage by prohibiting the denial or revocation of tax exempt status, licenses, contracts, benefits, etc.”

In short, the amendment wants to allow anti-LGBTQ discrimination against queer couples and to restrain government officials from intervening to stop it.

In a letter addressed to the 12 Republican senators who supported the bill, 21 of their colleagues wrote, “[We] ask that you oppose cloture on the Respect for Marriage Act unless the Lee amendment is added… The free exercise of religion is absolutely essential to the health of our Republic. We must have the courage to protect it.”

The letter neglects to mention that religious people of numerous faiths support the freedom to solemnize and recognize same-sex marriages.

We still have time to protect religious liberty. We’re asking our colleagues to support my amendment. pic.twitter.com/y7JXkxNXTZ

Despite these senator’s worries, a revised version of the bill submitted earlier this month guarantees to uphold all “religious liberty and conscience protections” currently defined by federal law. It states that no individual or group will be forced to “solemnize” same-sex marriages and that the legislation will threaten no individual or group’s tax-exempt status.

The bill is expected to receive a vote after the Thanksgiving holiday.