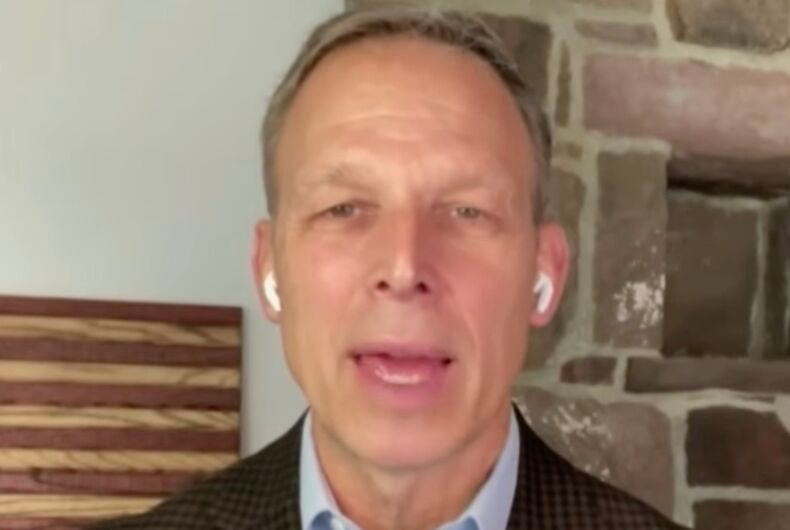 Rep. Scott Perry (R-PA) claims the Democrats tricked him into voting for the Respect for Marriage Act (RFMA). He is urging senators to learn from the error of his ways and vote against the bill.

The RFMA would require every state to recognize marriages performed in other states and would repeal the Defense of Marriage Act, the 1996 law that banned the federal government from recognizing same-sex marriages.

The bill would not require states that ban marriage equality to perform those marriages themselves, should they ban them if Obergefell v. Hodges, which nationally legalized same-sex marriage in 2015, is overturned. The bill also protects interracial marriages.

In an interview with evangelical leader Tony Perkins, who is the head of the anti-LGBTQ hate group Family Research Council, Rep. Perry said he had to make a difficult choice since voting against the bill would also mean voting against interracial marriage.

“When I walked onto the floor, of course the vote was on, I had to vote almost immediately. And I calculated incorrectly. And maybe that’s the best way to put it, that my long-standing support of traditional marriage would be understood, and I didn’t want to vote against interracial marriage.”

“And that’s the same trick they’re playing now. Now they’re gonna offer some kind of amendment but this actually literally destroys religious freedom and the ability to enforce religious freedom.”

He encouraged senators to “not be fooled” and vote against the legislation.

Last week, 62 senators – including 12 Republicans – voted to invoke cloture on the bill, meaning it is no longer at the mercy of a filibuster and the Senate is able to advance the legislation for a debate and vote.

“It tricks people,” Perry said. “You don’t want to be a racist but you’re not against traditional marriage. You shouldn’t have to make that choice, yet that was the choice in the bill and that’s what’s facing senators, and if they have not gone through it… They don’t realize this is an absolute assault on religious liberty and the ability to enforce the freedom of religion.”

Perkins also piped in to claim that the RFMA is “one of the most egregious assaults on religious freedom and the rights of parents. When you talk about what’s happening in classrooms across America, the indoctrination, this is linked to it.”

Perry agreed and said, “This is by design.”

An amendment to the bill will be put forward by Senators Tammy Baldwin (D-WI), Susan Collins (R-ME), Rob Portman (R-OH), Kyrsten Sinema (D-AZ), and Thom Tillis (R-NC) to clarify that religious nonprofits would not be required to provide “any services, facilities, or goods for the solemnization or celebration of a marriage” because of the law itself, although state anti-discrimination laws may still apply. It also says that the Religious Freedom Restoration Act and the Constitution’s religious freedom protections still apply.

But for Perry, the amendment isn’t enough, despite the fact that many religious leaders have agreed that the bill in its current form protects religious liberty. Even the anti-LGBTQ Mormon church has endorsed the bill as is.

But Perry touted a different and harsher amendment proposed by Sen. Mike Lee (R-UT), one that is not being strongly considered by the Senate. Perry said that “anything less than the Mike Lee amendment is gonna be unacceptable.”