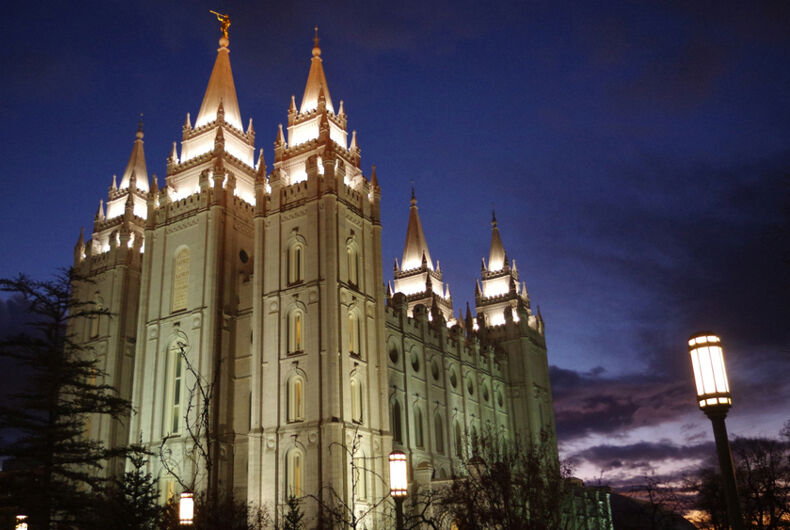 The nearly 17-million-member Church of Jesus Christ of Latter-day Saints – also known as the Mormon church – announced that it supports the Respect for Marriage Act, a bill that would codify the recognition of same-sex marriages performed in any state by other states and the federal government. The bill is expected to come to a vote in the Senate soon and could be voted on as early as this afternoon.

The church said in a statement that it continues to oppose same-sex relationships. But it cited religious freedom protections in the Senate version of the bill as “the way forward.”

“We believe this approach is the way forward,” the statement posted to the church’s website reads. “As we work together to preserve the principles and practices of religious freedom together with the rights of LGBTQ individuals much can be accomplished to heal relationships and foster greater understanding.”

“We are grateful for the continuing efforts of those who work to ensure the Respect for Marriage Act includes appropriate religious freedom protections while respecting the law and preserving the rights of our LGBTQ brothers and sisters.”

The statement is notable considering the church’s staunch opposition to marriage equality over the past several decades. The church and its members raised an estimated $22 million to help pass Proposition 8 in California in 2008.

It’s unclear exactly how far the religious exemptions go. The bill says that “nothing in this act… shall be construed to diminish or abrogate a religious liberty or conscience protection otherwise available to an individual or organization under 26 the Constitution of the United States or Federal law.” That part is referring to laws like the First Amendment and the Religious Freedom Restoration Act, the limits of which are hardly settled law with respect to marriage equality.

Meanwhile, some conservatives are freaking out about the law. Daily Wire editor Ben Shapiro – who is not Mormon – said yesterday that Republicans who support the bill don’t belong in the party.

“Let me just put this out there for the Republican Senators: if you vote in favor of the idea that society has an obligation to recognize male-male or female-female dyads, in the same way that society has an obligation to recognize male-female, you should not be in the Republican party,” he said. “This is not difficult stuff. Many Republicans will be tempted to vote for this simply to avoid the conflict. So that people don’t yell at them, ‘Oh my gosh, you’re not respecting love is love!’ Now first of all the love is love argument was always bullcrap.”

Ben Shapiro tells any Republican senator voting for the codification of same-sex marriage: "You should not be in the Republican Party" pic.twitter.com/qmM4JJk4rJ

Meanwhile, anti-LGBTQ organizations are saying that the bill will lead to “pedophilic marriage” and “polygamous marriages.”

The Respect for Marriage Act (or H.R. 8404) would require every state and the federal government to recognize marriages performed in other states. Proponents of the law argue that it’s necessary in the wake of the Supreme Court overturning Roe v. Wade, which shared some of the same legal reasoning as the Court’s decision in Obergefell v. Hodges, which legalized same-sex marriage in 2015. Justice Clarence Thomas also urged the Supreme Court to reconsider Obergefell now that Roe has been overturned, a sign that the Court may be coming for same-sex marriage rights as well.

The bill passed the House last July with all Democrats voting for it, 47 Republicans voting for it, and 157 Republican representatives voting against it. Out Sen. Tammy Baldwin (D-WI) initially said she thought 10 Republican senators would vote for it. However, she and Senate Majority Leader Chuck Schumer (D-NY) decided to delay the bill’s introduction until after the midterm elections.

Donald Trump announces 2024 presidential run. This gay Congressman is trying to stop him.