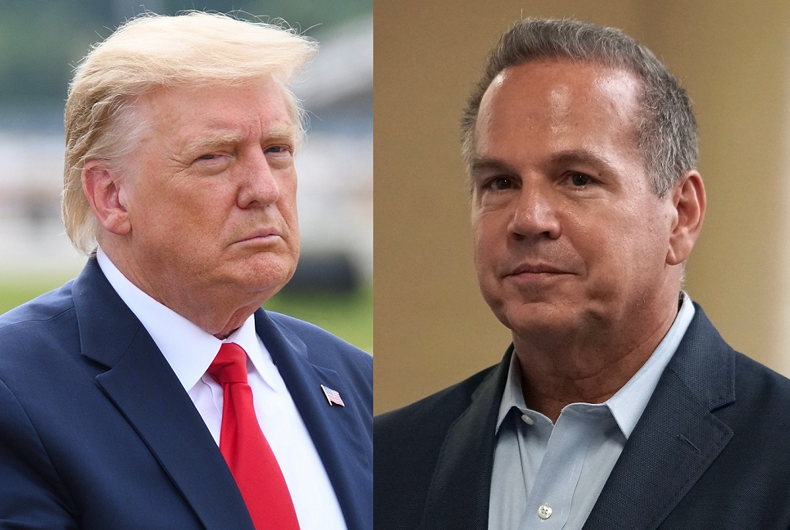 Donald Trump has announced his campaign to seek the Republican nomination for president in 2024 in an hour-long rambling speech in which he decried the “China virus,” immigration (he referred to potential immigrants as “rough people”), and “the radical left Democrats that are trying to destroy our country from within,” while promising to unify the country.

And out Rep. David Cicilline (D-RI) is trying to stop him from running at all.

“I am announcing my candidacy for president of the United States,” the 76-year-old former reality TV host said at his Mar-a-Lago resort in Palm Beach. “America’s comeback starts right now…. Your country is being destroyed before your eyes.”

The Guardian summarized Trump’s speech as discussing “a number of reforms that he lacked the authority to do, or realistically just can’t do,” including a promise to apply the death penalty to all drug crimes and end all homelessness without explanation of how he would do that.

Politico journalist Nicholas Wu reports that Cicilline, who was one of the managers of Trump’s second impeachment, is trying to get support for legislation to bar Trump from running for office, citing the 14th Amendment for authority.

“Given the proof – demonstrated through the January 6th Committee Hearings, the 2021 impeachment trial, and other reporting – that Donald Trump engaged in insurrection on January 6th with the intention of overturning the lawful 2020 election results, I have drafted legislation that would prevent Donald Trump from holding public office again under the Fourteenth Amendment,” a letter Cicilline is circulating in Congress reads.

The letter says that Trump, “despite knowing that the election results were lawful; attempted to intimidate state and federal officials when they did not support his false claims and unlawful plans.” It specifically cites how Trump tried to influence Mike Pence to abuse his role as the leader of the Senate and reject the results of the 2020 election so that Trump could remain in the White House.

Last year, Cicilline introduced articles of impeachment in the House that led to Trump’s second impeachment. He was later named one of the impeachment managers and brought the case to the Senate.

“We’ve seen this back-sliding of democracy and attempted coups in places all over the world, but never imagined it could ever happen in the United States of America,” he later told The Hill. “And we were watching it unfold before our very eyes. So it was really clear to me from that very first moment that we had to do something to hold the president at the time accountable for his incitement of this violence.”

“Today is just the kickoff to what will be a messy Republican primary with candidates competing to be the most extreme Maga Republican in the race,” DNC chair Jaime Harrison said. “The DNC will be ready for them all.”

“President Trump has my full endorsement and my support as our Republican nominee in 2024,” Greene said at a press conference before Trump even announced.

“President Trump has my complete and total endorsement for President in 2024! 🇺🇸” —@RepMTG pic.twitter.com/UQJR8yGJpT

The Lincoln Project has already denounced his candidacy, calling Trump “angry” and “vengeful” and saying that he will “wreck America again.”

“GLAAD documented more than 200 attacks against LGBTQ people throughout the Trump-Pence administration,” the LGBTQ organization tweeted. “It was an administration defined by anti-LGBTQ actions and rhetoric and policy that empowered white supremacists and fueled racism, xenophobia, antisemitism, and misogyny”

“GLAAD documented more than 200 attacks against LGBTQ people throughout the Trump-Pence administration. It was an administration defined by anti-LGBTQ actions and rhetoric and policy that empowered white supremacists and fueled racism, xenophobia, antisemitism and misogyny.” ⤵️

The Hallmark Channel is too LGBTQ-inclusive for Candace Cameron Bure