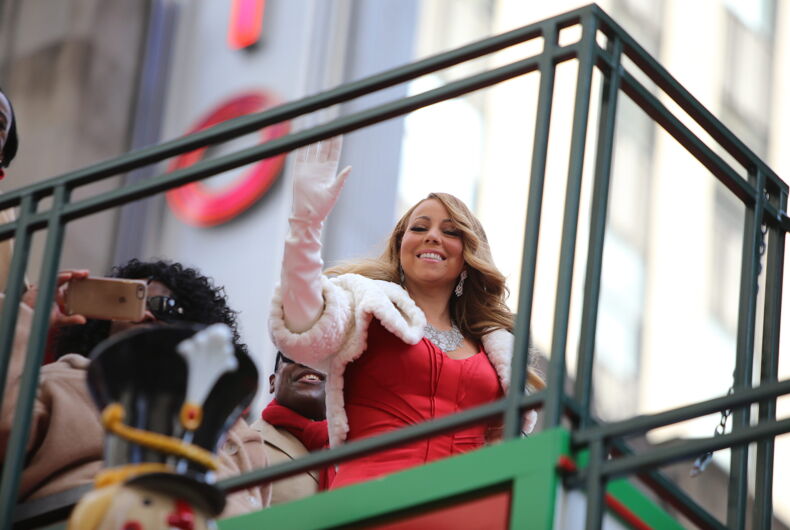 Earlier this month, Mariah Carey’s application to trademark the title “Queen of Christmas” was denied by the U.S. Patent and Trademark Office. Had she been successful, the “All I Want for Christmas Is You” singer would have been able to prevent other artists from using the phrase in music and on merchandise.

Singer Elizabeth Chan, who has put out original holiday albums every year for a decade, challenged Carey’s application, telling Variety that she felt “very strongly that no one person should hold onto anything around Christmas or monopolize it in the way that Mariah seeks to in perpetuity.”

It’s hard to argue with Chan’s logic there. And yet, Carey’s iron grip on the Yuletide pop culture zeitgeist presents a strong case for her claim to be, if nothing else, at least the unofficial Queen of Christmas.

“All I Want for Christmas is You”

Arguably Carey’s signature song, the 1994 single is that rarest of things: a contemporary Christmas song that has become a holiday standard. And it has only gained in popularity since its release, topping the Billboard Hot 100 chart for the first time in 2019 and returning to the chart at No. 25 this year. But numbers and stats be damned! The song is inescapable this time of year, pumping through speakers in malls, bars, everywhere pretty much as soon as the Halloween candy has been handed out.

The “All I Want for Christmas is You” videos. Plural.

Mariah Carey has filmed not one, not two, not three, not four, but five music videos for this song. That’s how iconic, how integral it has become to contemporary Christmas culture. The first, shot in 1993 and released along with the single, was directed by Carey herself – because who could possibly convey the song’s magic better than the Queen of Christmas? There’s also an alternate black-and-white Ronnette’s-inspired video, plus three others, including one featuring celebrities lip-syncing the song, released for the 25th-anniversary edition of her Merry Christmas album in 2019. Five videos for one song. One Christmas song. Who does that? Mariah-effing-Carey, Queen of Christmas, that’s who.

But wait! There’s more “All I Want for Christmas is You”! (Take a shot every time that song gets mentioned!) In 2015, Carey teamed up with illustrator Colleen Madden to bring even more joy to the children with a picture book based on her holiday hit. And this year sees the release of yet another Carey-penned picture book. The Christmas Princess is all about “Little Mariah” and her quest for a peaceful and joyous holiday. Because, obviously all Christmas Queens start as wee Christmas Princesses!

“All I Want for Christmas is You” gets all the attention and airplay, but actually, Merry Christmas, the 1994 album on which it originally appeared, really does slap from beginning to end! Its mix of gentle, traditional gospel influenced carols with big Wall of Sound energy and one truly transcendent ’90s house-infused gospel version of “Joy to the World” hit all the essential holiday notes.

“Joy to the World”

Sorry, this track from Merry Christmas deserves a second mention. Partly because it is a legitimate crime, it doesn’t get as much attention as “All I Want for Christmas is You.” And also because I literally cannot get through Merry Christmas without repeating this song at least twice!

56 Nights of Joy and Festivity!

That’s so many nights! So much joy! So much festivity! (Some might say too much!) Beginning in 2014, Carey set up shop for a series of holiday concerts at New York’s Beacon Theatre. She returned every year through 2017, taking the show on the road in Europe in 2018 and across the U.S. in 2019, spreading sugar plum fairy dust in her holly jolly wake!

She’s no Candace Cameron Bure but…

Keep your soppy made-for-TV Christmas movies! Give us Mariah Carey! The singer has made six holiday films and specials since 2015. She wrote, directed, and starred in Hallmark Channel’s 2015 rom-com A Christmas Melody. The following year she executive produced and starred in YouTube Red’s The Keys of Christmas alongside DJ Khalid and Mike Tyson of all people! In 2017, she voiced a chicken in the animated nativity-inspired feature The Star, earning a Golden Globe nomination for the film’s original song “The Star.” That same year, she lent her voice to another animated Christmas film based on her own children’s book based on “All I Want for Christmas is You” based on literal unalloyed joy. And in 2020 and 2021, she executive produced and starred in a pair of old school holiday variety specials for AppleTV+. This year, Carey’s taking her seasonal cheer to CBS, which will air Mariah Carey: Merry Christmas to All on December 20.

Sure, we all roll our eyes when all the Christmas paraphernalia appears on store shelves in mid-October, but when Mariah Carey says the Yuletide season has started, it has started! Who are we to argue? This year, Carey went viral with a tongue-in-cheek clip released on November 1, featuring her transforming from a sultry witch into a Christmas snow bunny the moment Halloween is over.

Look, Mariah Carey is nobody’s opening act. She is a headliner, dammit! But when it comes to Christmas, even the Queen gets second billing to St. Nick. Last week, Carey announced that she will be performing live at this year’s Macy’s Thanksgiving Day Parade. “My childhood dream is coming to life!” she wrote in an Instagram post. “I’m going to be opening for the one and only, SANTA CLAUS.”

It’s worth remembering that a queen is a supreme ruler, and Carey seems to have no problem wielding her power. In a recent USA Today profile, she shared her strict Christmas dogma: “When I’m not on stage and I’m in holiday mode, there are rules that I set,” she said. “I don’t care who it is – the kids, if I have guests, whatever – nobody is allowed to play or watch anything other than a Christmas-related thing. If I wake up in the middle of the night and walk into the living room, and the music isn’t playing and the lights aren’t on, I just can’t handle it.”

Life
All I Want For Christmas Is You, Christmas, Mariah Carey

What happened to the first generation of children from out gay & lesbian homes?