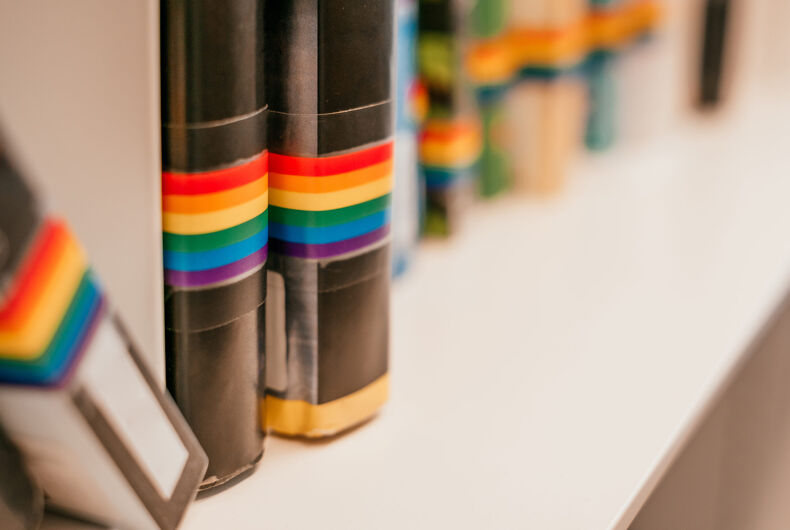 Leaked audio from a meeting between a Texas school district superintendent and a group of librarians has revealed staunchly anti-LGBTQ motives behind the district’s attempt to remove books from school shelves.

Jeremy Glenn is the superintendent of the Granbury Independent School District. At the meeting, he emphasized that their community was “very, very conservative” and that any school employee who does not possess conservative beliefs “better hide it,” according to an investigation by the Texas Tribune and ProPublica.

He went on to discuss the need to remove sexually explicit books from the shelves. While he started by saying he didn’t care if the books were about homosexuality or heterosexuality, he then spoke specifically about banning books with LGBTQ content.

“And I’m going to take it a step further with you. There are two genders. There’s male, and there’s female. And I acknowledge that there are men that think they’re women. And there are women that think they’re men. And again, I don’t have any issues with what people want to believe, but there’s no place for it in our libraries.”

Later in the conversation, he made his intent even more explicit.

“It’s the transgender, LGBTQ and the sex — sexuality — in books. That’s what the governor has said that he will prosecute people for, and that’s what we’re pulling out.”

The school then spent two weeks reviewing 130 books, three of which were permanently banned, including This Book Is Gay – a guide for LGBTQ teens – and We Are the Ants, a story about a gay teenager.

But this, Glenn said at the meeting, would only be the beginning. The board has also granted school administrators the power to remove books from shelves without any review process if they decide they are not appropriate for students.

Glenn has a long history of anti-LGBTQ sentiment. In 2014, he co-wrote a book, Daily Devotionals for Superintendents, which decried marriage equality and criticized states that outlaw conversion therapy. The book also reportedly claimed that “alternative lifestyles” are being indoctrinated to kids at school in the same way that Adolf Hitler indoctrinated youth when he took over Germany.

Legal experts believe that Glenn’s attitude in regards to book banning could be both unconstitutional and violate federal anti-discrimination laws.

In a statement, Glenn claimed to support all students but also defended his actions.

“In Granbury and across Texas we are seeing parents push back and demand elected officials put safeguards in place to protect their children from materials that serve no academic purpose, but rather push a political narrative. As a result, classrooms and libraries have turned schools into battle grounds for partisan politics.”

Another statement from Jeff Meador, a spokesperson for the school district, said that the permanently banned books are “sexually explicit and not age-appropriate”  and that the district continues “to house a socially and culturally diverse collection of books for students to read, including books which analyze and explore LGBTQ+ issues.”

But LGBTQ students in the district are angry.

“I don’t feel incredibly safe or welcomed by a large majority of the students at my school,” said Lou Whiting, a non-binary Granbury High School junior. “I’ve been called slurs. I’ve been verbally attacked. I’ve been physically attacked. But it kind of feels worse when the attacks are coming from adults, from the people who are supposed to keep us safe.”

And once it came to light that the school had removed the 130 books for review, 17-year-old Kennedy Tackett, a high school senior who is bisexual, created a petition demanding the books be put back on the shelves immediately. She and some other students also attended a school board meeting to voice their demands.

But the board didn’t listen and instead changed an existing policy so they could keep books under review off the shelves.

“​​Let’s not misrepresent things. We’re not taking Shakespeare or Hemingway off the shelves,” Glenn said at the meeting after Tackett told him he was failing at his job to protect students. “We’re not going and grabbing every socially, culturally, or religiously diverse book and pulling them. That’s absurd. And the people that are saying that are gaslighters, and it’s designed to incite division.”

In response, Whiting sold T-shirts that said “Radical Gaslighter” and made $2000 for the American Library Association’s Freedom to Read Foundation.

Kate Huddleston, an attorney with the Texas chapter of the American Civil Liberties Union, said the leaked audio is a disturbing glimpse into what is happening in other school districts moving to ban books.

“This is very strong evidence of what is happening in the background. But it also raises a host of questions about all the other districts in Texas where this is happening and we don’t have audio.”