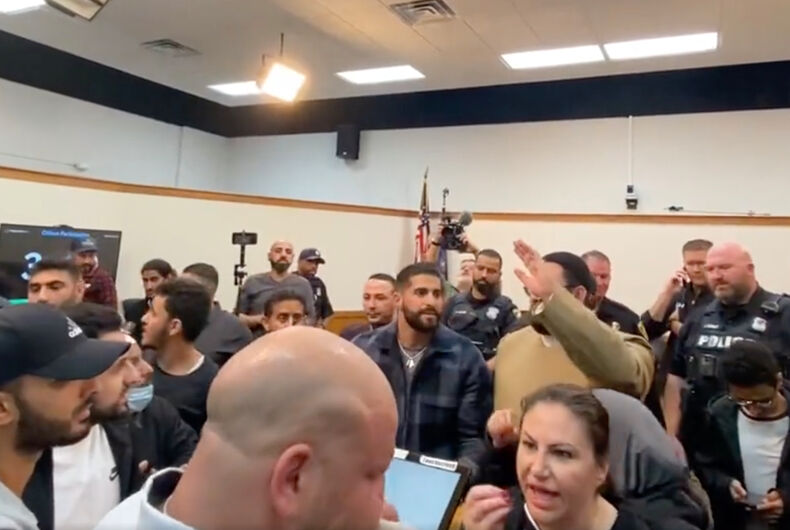 A school board meeting in Michigan ended in chaos as unruly protesters shouted their objections to LGBTQ books in school libraries.

Monday night’s meeting of the Dearborn Public Schools’ board was reportedly packed with hundreds of demonstrators carrying signs that read “Keep Your Dirty Books in the Closet” and “If Democracy Matters, We’re the Majority.”

Unlike many similar scenes that have played out across the country over the past year, the protesters in Dearborn were primarily Muslim. According to The Detroit Free Press, Dearborn is 47 percent Arab American, most of whom are Muslim. But a key organizer of recent local protests is Stephanie Butler, a Christian, who attended both Monday night’s board meeting and a September protest outside the Henry Ford Centennial Library.

At Monday’s packed meeting, protesters became frustrated as the board attempted to address issues unrelated to book challenges and by the three-minute time limit on speakers during the meeting’s public comment period. Police officers were unable to calm the increasingly agitated crowd, many of whom shouted down board members.

At one point, an attendee informed the crowd that the fire marshal had determined that it was unsafe to continue the meeting, angering protesters further. Board chair Roxanne McDonald ended the meeting, but the crowd refused to disperse, continuing their calls to vote the board members out.

Meeting of Dearborn Schools has descended into chaos and confusion as board members walked out. Mobs opposed to some LGBTQ books took over the meeting as various factions jostled for power. Police themselves were unsure if meeting was still on. “Vote them out,” crowd chants. pic.twitter.com/YJtLWGsX7k

“We can have a spirited debate, but we can’t conduct ourselves this way,” he said. “This community is better than this. We’re brothers and sisters regardless of race, ethnicity, religion.”

Shahin told attendees that the meeting would resume on Thursday evening at Fordson High School to accommodate a larger crowd.

Brian Stone, a member of the LGBTQ community who attended the meeting in support of LGBTQ books, had to be escorted to his car by police after angering several protesters.

“Leave our kids alone,” they shouted as he left.

“What happened tonight at the school board meeting in Dearborn is very embarrassing and is totally rejected,” Siblani, wrote in a Facebook post. “Remember that the loss of any individual’’s right to express himself/herself is the beginning of the end of all people’s rights… Remember that Islam is a religion of love, peace and tolerance, not a religion of insults, violence and threats.”

Members of the American Federation of Teachers union, who attended the meeting in support of LGBTQ books, released the following statement: “Everyone believes that our schools and classrooms should be safe, welcoming, and supportive environments that are free from discrimination and bullying of any kind…. and that includes young people who identity as LGBTQ. Having resources and books in our classrooms and libraries that speak to the diversity of our students and the broader world we share is critical to providing a quality and supportive education.”