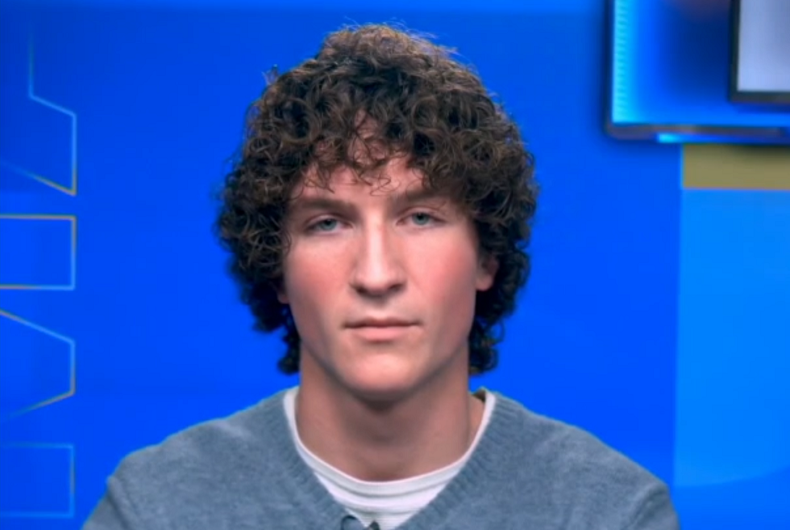 Instead, on May 22, he delivered a thinly veiled graduation speech using his curly hair as an analogy for his sexual identity. He’s now sharing his tale to show how the state’s law silences queer students and allies.

Related: Ron DeSantis isn’t going to like these billboards popping up all over Florida’s tourism hotspots

Moricz — the senior class president of Pine View School for the Gifted in Osprey, Florida — said that before his graduation, his school’s principal, Stephen Covert, threatened to cut his microphone if he discussed being gay or the law. Such remarks would be “polarizing and not school appropriate.”

Moricz told WZVN-TV, “It was like a sledgehammer to the face. I could not comprehend it because it felt so backwards. I’m told that my human rights are controversial and therefore not appropriate for a school setting… for my speech at my school graduation.”

Despite his feelings, he agreed to follow his principal’s demand because he didn’t want to ruin graduation for the hundreds of other students just because of his principal and state government.

In his graduation speech, Moricz said, “I used to hate my curls. I spent mornings and nights embarrassed of them, trying desperately to straighten this part of who I am—but the daily damage of trying to fix myself became too much to endure.”

“So while having curly hair in Florida is difficult, due to the humidity,” he continued, “I decided to be proud of who I was and started coming to school as my authentic self.”

He then said he found a teacher to discuss his curly hair with “because I didn’t have other curly-haired people to talk to.” He then said that he came out as curly-haired to his parents and found love and support.

He urged his listeners to use their voting power to help ensure that other curly-haired students can find love and support as well.

“That is what is at stake,” he told the graduation audience. “There are going to be so many kids with curly hair who need a community like Pine View and they won’t have one.”

Despite his clever workaround, Moricz said, “It was a really dehumanizing decision because I had to take something I had written — and was really proud of that just discussed my identity and my human rights — and I had to find a way to be clever to discuss who I was.”

“I just had to be clever about it, but I shouldn’t have had to be, because I don’t exist in a euphemism and I deserve to be celebrated as is.”

While the Sarasota County School District has no written policy for graduation speakers, the district said all student speeches are reviewed in advance and all students are told that “graduation should not be a platform for personal political statements, especially those likely to disrupt the ceremony.”

“Should a student vary from this expectation during the graduation, it may be necessary to take appropriate action,” the district’s statement said.

Moricz is one of the several plaintiffs in a lawsuit challenging the state’s anti-gay law. He plans on studying human rights law at Harvard University.

He isn’t the first reported incident of schools using the law to intimidate and silence LGBTQ people and allies, especially as school boards’ attempts to ban LGBTQ books from school classrooms and libraries are escalating dramatically.

A sixth-grade Orlando science teacher resigned in spring after parents complained about his acknowledging his same-sex marriage at school. A Cape Coral middle school art teacher was fired after revealing her sexual orientation to students. Another teacher was forced to take down their rainbow “COEXIST” flag, one that they had flown for years, after the “Don’t Say Gay” law passed.

Jack Petocz, a 17-year-old senior in Palm Coast, was forbidden from running for class president because he organized a massive student walkout in protest of the law. A Seminole County school district threatened to censor one high school’s yearbook because it contained images of a similar protest, even though past yearbooks had covered other non-school sanctions protests in the past.