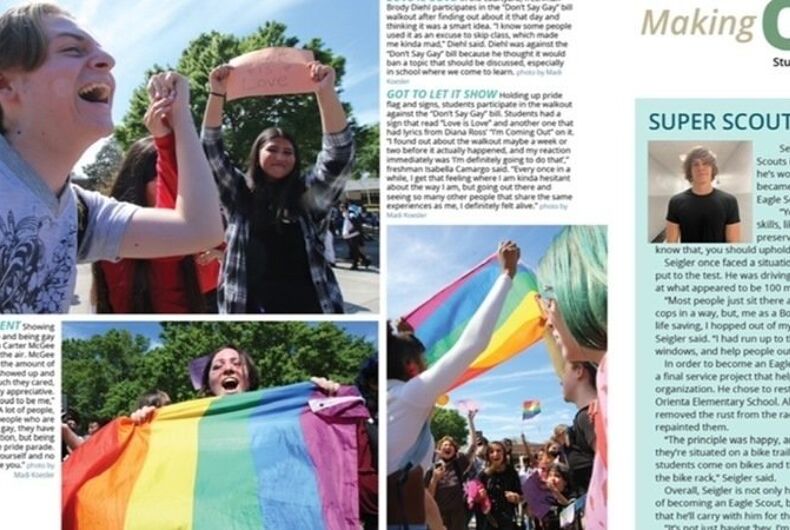 The Seminole County School District initially announced the delayed distribution of the Lyman High School yearbook over the images. The district wanted the images covered up with stickers before the books are distributed because the protests “did not meet school board policy and [the images were] not caught earlier in the review process,” the school’s principal Michael Hunter said, noting that the protest wasn’t an official school-sanctioned event.

Related: Parents are flipping out over this pride section in a Texas high school yearbook

The Lyman High School students were supposed to have a yearbook signing party on Monday, but it was postponed due to the district’s opposition. In response, the students began circulating a #STOPtheSTICKERS petition and spoke out at a Tuesday meeting of the Seminole County School Board to oppose the censorship.

Madi Koesler, a former Lyman high school student who started the aforementioned petition, said that the district’s reasoning is bunk.

She claims that Principal Hunter allowed students to walk out in protest over the Don’t Say Gay law and told teachers not to try to stop the demonstration. Some teachers participated in the demonstration, she added, and pictures of similar protests were included in the yearbooks of Hagerty and Oviedo High Schools, which are also in the Seminole County school district.

“The biggest difference is Lyman’s photos contain pride flags!” Koesler wrote. She also noted that Lyman’s 2018 yearbook included photos from “a student walkout advocating for stricter gun laws following the Marjory Stoneman Douglas [High School] shooting and those were not met with any resistance” from the district.

“This really shouldn’t be happening because all we did as journalists was document what was happening at our school on our campus,” Skye Tiedemann, one of the yearbook’s editors-in-chief, told the Orlando Sentinel.

“To have that covered up isn’t right…. This is censorship.”

In a Tuesday evening vote, the Seminole County School Board unanimously voted against censoring the yearbooks with the stickers, opting instead to post a sticker on the page that explains the protest wasn’t a school-sanctioned event. Over 30 students, teachers, and parents spoke at the meeting to oppose the proposed censorship.

District Superintendent Serita Beamon claimed that the censorship wasn’t trying to “target any student, to try and silence any voice” and didn’t violate First Amendment protections against government censorship of free speech.

“There is some speech that is prohibited. And that includes speech that is likely to cause substantial disruption or that materially interferes with school activities or the educational process,” Beamon said.

However, the board members called the censorship proposal “a mistake” and thanked the students for bringing it to their attention.

The Pope says that God “doesn’t disown” LGBTQ people, but his Church certainly does