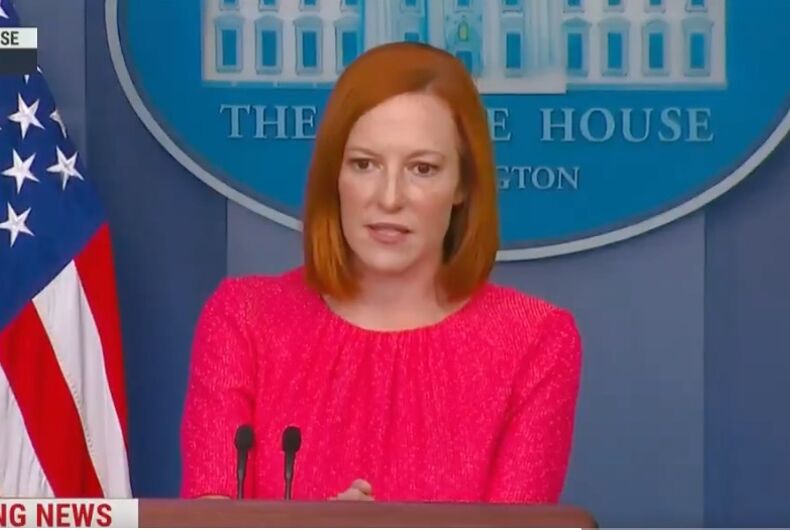 White House Press Secretary Jen Psaki slammed Republicans for their “hypocrisy” in expressing concerns about peaceful protests outside of Supreme Court justices’ homes while many were opposed to law enforcement getting investigating death threats that school board members received over the last year as conservatives protested school board meetings.

At the White House press briefing yesterday, a reporter asked about President Joe Biden’s opinion about Sen. Susan Collins (R-ME), who called the police about someone writing a non-threatening message with sidewalk chalk outside her home. The protestors were there because Collins voted to confirm several of the justices who voted for the leaked decision in Dobbs v. Jackson Women’s Health Center, which will end the federal right to an abortion in the U.S. and overturn Roe v. Wade.

Psaki said that she wouldn’t comment specifically on Collins and her experiences with sidewalk chalk, so the journalist asked generally: “Do you consider sidewalk chalk vandalism?”

“I’ll let others define that,” Psaki started. “But there are lots of ways to peaceful protest.”

Then she called out Republicans, who have been calling for law enforcement to end the pro-choice protests, despite their outspoken opposition to the Department of Justice investigating death threats that were a result of school board protests this past year.

“What’s also important to note here is what I would call the hypocrisy of the silence on the other side when there have been intimidation, protests outside of the homes of school board members, the Michigan Secretary of State,” she said. “There have been countless women who have dealt with and navigated through threats made as they’re seeking reproductive healthcare, which, by the way, has been legal for 50 years.  And there has been no outcry about that.”

Psaki: What’s also important to note here is what I would call the hypocrisy of the silence on the other side when there has been intimidation outside of the homes of school board members, the Michigan SOS… pic.twitter.com/SFXgTezL2b

Last year the National School Boards Association asked for federal assistance in dealing with threats of violence against school boards, as school board meetings all over the country have been picketed and descended into chaos over issues like transgender students being treated equally in schools, white kids learning about racism, and masking policies to contain the COVID-19 pandemic.

Organizations like Stand Up Virginia and Moms for Liberty have been organizing protests while rightwing media spreads misinformation about schools, and in some cases people have turned to violence.

Loudoun County, Virginia school board member Brenda Sheridan received one such threat in a handwritten letter addressed to her child that said: “It is too bad that your Mama is an ugly communist whore. If she doesn’t quit or resign before the end of the year, we will kill her, but first, we will kill you!”

“You people need to be arrested, tried and then hung by the neck until you’re dead,” an email threat she received said. Another said, “LGBTQ is an abomination” and ranted about “Antifa” and “leftist scum.”

Attorney General Merrick Garland issued a memo in response to the National School Boards Association’s request for assistance saying that the Department of Justice would work with local law enforcement to investigate threats of violence, which angered conservatives. Many falsely claimed that any conservative parent who complains about, for example, transgender students being allowed to use the bathroom while they’re at school is going to be treated as a terrorist by the FBI, even though Garland’s memo specifically said that it is only about threats of violence, not people expressing an opinion.

“The last thing the Justice Department and FBI need is a very vague memo to unleash their power – especially when they’ve shown zero interest in holding their own accountable,” said Sen. Chuck Grassley (R-IA) at the hearing in October 2021.

But when it came to pro-choice protestors, Sen. Grassley was suddenly more concerned about their protests, saying that “pro-abortion activists set out to intimidate the court mere minutes after the draft was leaked” this past weekend.

“Peaceful protesting at the court is one thing, but threats and coercion to influence the outcome of a court decision will neither be fruitful, nor tolerated, and violators of the law must be held accountable,” he said.

Psaki also referred to threats made in 2020 against Michigan Secretary of State Jocelyn Benson. According to Benson, “Dozens of armed individuals stood outside my home shouting obscenities and chanting into bullhorns in the dark of night” as she was decorating her house with her four-year-old son.

The protestors were trying to make Benson overturn the results of the 2020 presidential election. Biden won Michigan by 154,188 votes.