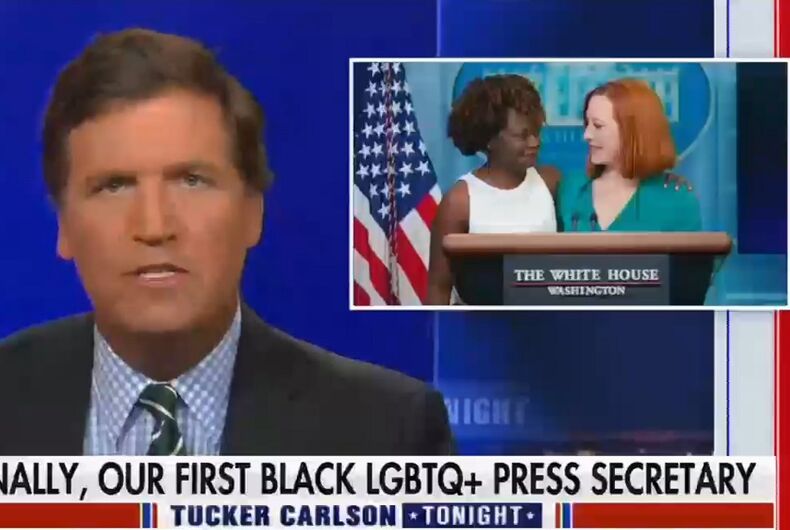 Tucker Carlson is very angry that Karine Jean-Pierre got a job everyone expected her to getPhoto: Screenshot

Fox News host Tucker Carlson raged on his show last night about out White House Principal Deputy Press Secretary Karine Jean-Pierre, saying that she’s unqualified for her job despite her decades of work in politics and bizarrely claiming that no one knows what “LGBTQ” stands for.

“Not only is she a member of the out LGBTQ+ community, she’s also, critically, the product of a private school and an Ivy League college and yet still oppressed somehow,” Carlson – a Harvard graduate who complains regularly about how white men are oppressed – said on his show about Jean-Pierre.

Related: Sarah Palin is already claiming voter fraud for an election that hasn’t happened yet

While announcing Jean-Pierre as her replacement, Psaki extolled her “decades of experience from her early years working in government and politics in NYC, to her years as an outspoken advocate, to serving as a long-time advisor to [President Joe Biden] back when he was the [vice president].”

Biden also discussed Jean-Pierre’s “experience, talent and integrity” in announcing her promotion in a press release with several paragraphs about her experience.

Carlson ignored all of that and played an edited clip of people saying that Jean-Pierre is Black and gay, as if they said nothing else.

“Karine Jean-Pierre is our first out LGBTQ+ White House press secretary and that’s all you need to know,” Carlson ranted. “It’s a good thing, shut up and celebrate. That’s why she got the job. She’s in the right group and to the Biden administration, which thinks exclusively in terms of groups and never in terms of individuals because individuals are messy and inconvenient. The group is all that matters.”

“Show us your picture and we’ll tell you if you’re qualified for the job.”

Longtime LGBTQ Nation readers might be surprised to hear Carlson say that Jean-Pierre is unqualified considering her years in the public eye, first as a part of John Edwards’s 2004 campaign team, then in the Obama White House, and most recently as a part of the Biden-Harris campaign. She has been a prominent member of the White House communications team for the past year and a half and has led press briefings and made headlines.

In the middle of his rant – where he accused the effervescent Jean-Pierre of being “furious” at America because, as a Black woman, she is willing to call out racism when she needs to – Carlson bizarrely claimed that Psaki couldn’t say what the letters in LGBTQ stand for.

“But before you light a candle and begin tonight’s celebrations, quick question: What does LGBTQ+ mean?” he said disdainfully. “Hey, Jen Psaki, let us know, if you have a minute, explain every letter in that acronym and specifically what it signifies.”

“We’ll wait. Don’t hold your breath, she’s not gonna do it because like everybody else who uses that phrase, Jen Psaki literally has no idea, no clue at all what it means,” Carlson claimed even though he never even asked her. “It’s one of those terms you’re not supposed to define. One day you just start using it – LGBTQ plus! – and anyone who asks what it means is merely presumed to be in the out-group.”

“So it’s not actually a word,” he said about the initialism, “it’s a litmus test.”

The first result when googling “What does LGBTQ stand for” is “lesbian, gay, bisexual, and transgender. At times, a Q will be added for Queer and/or Questioning, an A for Ally, an I for Intersex and/or a TS for Two- Spirit.” It’s unclear why Carlson didn’t try looking it up before ranting about how no one knows what “LGBTQ” means.