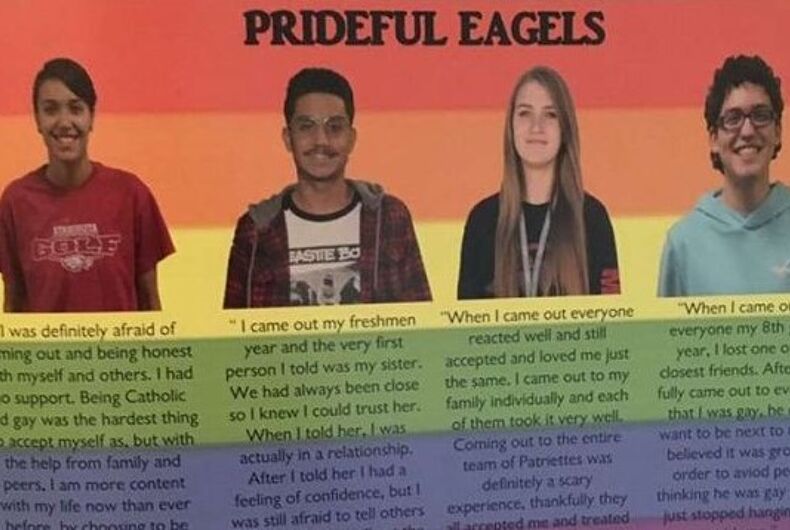 Houston parents are losing their cool after they discovered that the annual Atascocita High School yearbook contains a pride section highlighting out LGBTQ students against a rainbow background.

The LGBTQ spread was the school’s first, and included quotes from students about how and why they came out. Yearbook editor Kyla Armour was proud of the new section, until he learned that parents and other community members were disparaging him and the featured students on a forum at Atascocita.com.

“His goal was to be as inclusive as possible for the entire student [body] and to make everyone feel important in the book,” Kyle’s mother Kimberly Hicks Armour told The Houston Chronicle. “People were saying he was dumb, not smart, that I should not be proud of who he is. I’m very proud of who he is. He did take a stand and make something diverse for the community and to our school.”

One user on the online forum named “SteelerNation” said the spread was too bold.

“That’s jamming their crap down our throats!” they wrote, adding in another post: “There is no place in a High School Yearbook for deviant sexuality.”

“Hope they self-deport. That crap does not belong in a USA yearbook,” they wrote. “They need to throw those books in a pile and burn them, like THEY do the American flag.”

“We can’t pray in school but now we have a section strictly dedicated to the gay community explaining how, when and why they came ‘out,'” they wrote. “I’m honestly disgusted and embarrassed.”

The conversation has continued to spin off into additional threads, with other parents chiming in to oppose the focus on LGBTQ and other marginalized students.

“That crap has no place in a yearbook. I am glad I didn’t order one for my daughter or I would be demanding a refund. It offends my family’s religious and moral beliefs,” user “WetFlyers” wrote of the LGBTQ section. They also criticized one student’s quote that included the innocent if immature “I can turn your girl.” “If the LGBT’s are allowed to brag about their sexuality why would the same type of brag not be allowed from my straight student? I cannot stand AHS and cannot wait to be done with it. Can you just imagine what would happen if a student posted something to the effect of ‘I tapped that’ or ‘I’ll grab him by the balls’?

But like other community members, this user didn’t stop at homophobia, and kept right on rolling into racism.

“I wonder now that they have published that and also have a ‘black student association’ what they are going to do next year when our white straight students start the ‘white normal students association.’ But the minute anything is labeled white it is considered racist. What is the club for black students if not racist?” WetFlyers asked.

Other commenters claim that the anti-LGBTQ objections were never the main point, and that they were more concerned about senior quotes that demeaned other students.