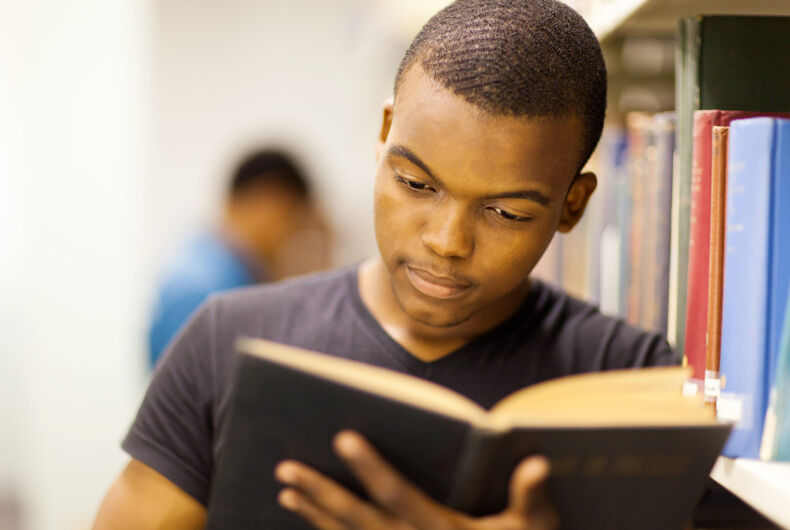 About one-third of the 1,586 books banned from schools nationwide have LGBTQ themes and characters, according to a report from the free-speech organization PEN America.

The bans have largely come from Republican politicians, conservative school boards and so-called “parents’ rights” groups that have opposed such content as “woke” “indoctrination” that’s “inappropriate” for school children.

For their report, PEN America examined publicly noted book bans occurring from the start of July 2021 to the end of March 2022. During that time, school districts banned 379 LGBTQ titles, including 84 that deal with transgender topics and characters.

Four of the most frequently banned books all had LGBTQ characters or themes including the nonbinary and asexual graphic novel Gender Queer: A Memoir by Maia Kobabe (banned in 30 districts), the autobiographic YA memoir All Boys Aren’t Blue by George M. Johnson (banned in 21 states), a coming-of-age novel Lawn Boy by Jonathan Evison (banned in 16 districts), and the non-fiction trans/nonbinary book Beyond Magenta: Transgender Teens Speak Out by Susan Kuklin (banned in 11 districts).

In addition to LGBTQ books, 283 of the banned titles deal with sexual or health-related content, 142 deal explicitly with sex, 21 cover abortion, 32 cover teen pregnancy, and 14 cover puberty. Of those, 95 deal with sexual assault. Nearly 61 percent of the banned books dealt with racism or non-white characters. Many of these titles will now be unavailable to the students that need them most.

The report showed a “disproportionate targeting of books by or about people whose identities and stories have traditionally been underrepresented in children’s and young adult literature, such as people of color, LGBTQ+ individuals, or persons with disabilities,” PEN America wrote.

Unsurprisingly, southern states — like Texas, Florida, Oklahoma, Kansas, Tennessee, Georgia and Missouri — were among the states that banned books most often, but midwestern and northern states like Indiana, Virginia, Pennsylvania and New York were also among the most censorious nationwide.

Approximately 96 percent of all the bans were initiated by school administrators or board members, “in a wide range of ways… and rarely with the requisite written forms that most district policies officially require,” PEN America noted. None of the books meet the legal definitions for “obscenity” and “pornography” despite claims to the contrary.

More worrying, in 98 percent of all instances, the schools involved didn’t follow best practice guidelines outlined by the American Library Association (ALA) and the National Coalition Against Censorship (NCAC) to ensure that the bans didn’t violate First Amendment protections against free speech which prohibit government officials from banning or punishing free expression.

“Today, state legislators are introducing — and in some cases passing — educational gag orders to censor teachers, proposals to track and monitor teachers, and mechanisms to facilitate book banning in school districts,” PEN America added. “At the same time, the scale and force of book banning in local communities is escalating dramatically.”

“While the Supreme Court has recognized the ‘broad discretion’ granted to local school boards in the ‘management of school affairs,'” PEN America wrote, “that discretion does not negate the responsibility of engaging in proper, considered processes concerning selections or removals.”

Even when school districts don’t outright ban books, the political campaigns of hostility against queer- and race-inclusive education can discourage teachers from discussing any potentially taboo topics.

Legal threats, such as lawsuits filed by the ACLU, and community pressure have resulted in some of the banned books being returned to the shelves. But PEN America believes that librarians or teachers in numerous states are likely preemptively removing books or not recommending them in order to skirt controversy.