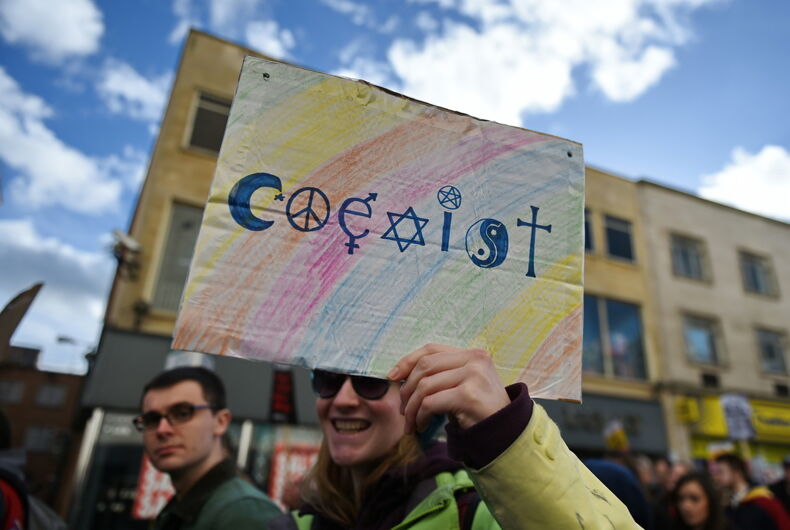 A teacher in Sarasota County, Florida, said that he was forced to take down his rainbow “COEXIST” flag shortly after the state’s Don’t Say Gay law was signed.

Jeremy Baldwin teaches social studies at Booker High School and he has flown the flag in his classroom for four years without encountering any problems.

COEXIST flags and symbolism are a statement against religious conflict and the letters of the word are usually written out with symbols of different religions. The rainbow is often a symbol of LGBTQ pride.

Baldwin said that he flew it to “make sure students feel comfortable and welcome in his classroom.”

“It is just something that’s meant to be there and kind of give the room an ambiance that everyone is welcome and we are just going to get along and coexist,” he said.

But shortly after Gov. Ron DeSantis (R) signed the state’s Don’t Say Gay law, Baldwin was told to take it down because it’s “political” in nature.

H.B. 1557, the Don’t Say Gay law, bans discussions of sexual orientation and gender identity in younger grades and requires them to be “developmentally appropriate” in order grades. Those terms aren’t really defined in the vague law that empowers parents to sue if they feel that the law was violated.

“I know the law says nothing about ‘don’t say gay,’ but in action, it sure looks like it is ‘don’t say gay’ if right after that is passed, a flag I have had for four years is now suddenly asked to be removed because it is considered political,” he said. “Other than being told that it was political by my principal, no one will define why that rainbow flag is considered political.”

“The biggest question I got from my students was, ‘Why is that political? That is not Republican, that is not Democrat,'” he said. “It’s not trying to persuade anyone to believe one way or another, it’s just a show of acceptance and approval. That is what is the most frustrating.”

““With regard to Booker High School, we can confirm that a teacher was asked to remove a flag from their classroom that was considered to be in violation of School Board Policy 2.51 (Political Activity on School Board Grounds),” Sarasota County Schools said in a statement. “It is the expectation of all district administrators, school-based administrators, teachers, staff members, and students to adhere to School Board policies and work together to maintain a safe and effective working & learning environment for all.”

Baldwin has at least one school board member on his side.

“I know that the policy is being cited about it being political, but I don’t view the rainbow flag as political. I view that as an identity, which is not a political item,” said Sarasota County school board member Thomas Edwards.

Heterophobia: Is it real?