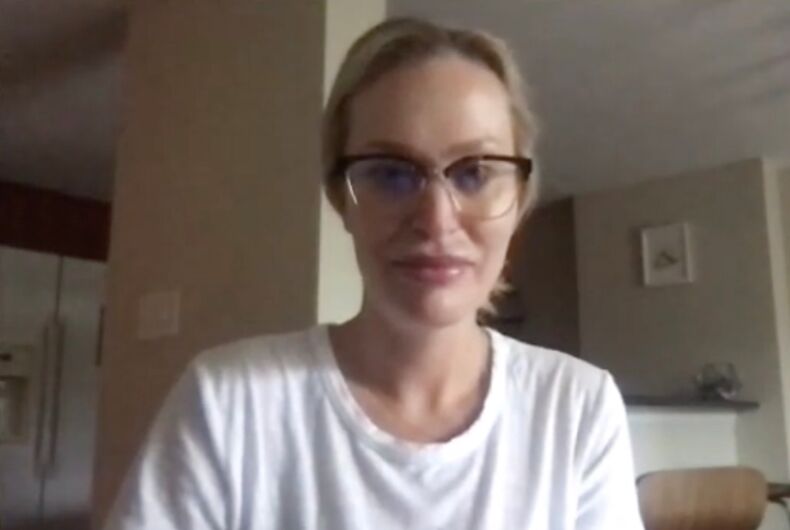 In an email to The Florida Phoenix in response to calls for her resignation, Christina Pushaw doubled down on the belief that those who don’t support the bill support the “grooming” of children.

And in a tweet responding to out state Rep. Carlos Smith’s criticism of her disgusting remarks, she implied he is a sex offender, saying “A hit dog hollers.”

“It’s inappropriate for adults to instruct children in VPK-3rd grade (ages 3-9) about sexuality,” she wrote in her emailed statement. “There is no good reason a teacher needs to talk to a 7-year-old about sex, any questions a child has at that age should be addressed by their parent or guardian.”

“Talking about adult topics with young children is a tactic of groomers, and as I said, not everyone who opposes the bill is a groomer — but they apparently don’t see a problem with adults instructing very young children about sexual topics. And sadly, that creates an environment where grooming can happen.”

But the bill doesn’t just ban discussions about sex.

Officially known as the Parental Rights in Education Bill, it says teachers cannot “encourage classroom discussion about sexual orientation or gender identity in primary grade levels or in a manner that is not age-appropriate or developmentally appropriate for students.” It also says parents can sue their children’s schools for failing to adhere to these rules.

The bill has passed the Florida House and is awaiting a final vote in the Senate.

In Pushaw’s original tweet, she wrote that the bill should be considered an “Anti-Grooming Bill.”

“If you’re against the Anti-Grooming Bill, you are probably a groomer or at least you don’t denounce the grooming of 4-8 year old children,” she said. “Silence is complicity. This is how it works, Democrats, and I didn’t make the rules.”

If you’re against the Anti-Grooming Bill, you are probably a groomer or at least you don’t denounce the grooming of 4-8 year old children. Silence is complicity. This is how it works, Democrats, and I didn’t make the rules.

Her comments are part of the age-old homophobic cannon that has long considered LGBTQ people dangerous to children, which is, apparently, why Pushaw feels the “Don’t Say Gay” bill is necessary.

Her email defending her words expressed that Gov. DeSantis, himself, has never called the bill an anti-grooming bill.

“It was my personal account and I was tweeting off-work hours. The Governor in his statements about this legislation, has emphasized the importance of parental rights and making sure all instruction in our schools is developmentally appropriate,” she said.

“For ages 3-9, classroom instruction on sexual topics is not developmentally appropriate, and it’s difficult to understand why anyone would disagree.”

She went to say she does not regret “raising concerns about child safeguarding” and then claimed it is actually those who oppose the bill that are targeting LGBTQ people.

“The only people who singled out the LGBT community are the opponents of the bill, who have been baselessly accusing us of homophobia — when the bill itself doesn’t single out the LGBT community or even mention the word ‘gay.’ Any type of sexual content, whether it’s straight, LGBT or anything else, is inappropriate for 3- to 9-year-old children — and I can’t believe that is controversial to rational adults.”

“A hit dog will holler”.

That’s what #DeSantis spokesperson said when I responded to her accusations that #DontSayGay opponents are PEDOPHILES.

I’m speechless. Republicans and Democrats must condemn these personal and libelous attacks on my character, paid with taxpayer money. pic.twitter.com/N7ozYy8oD5