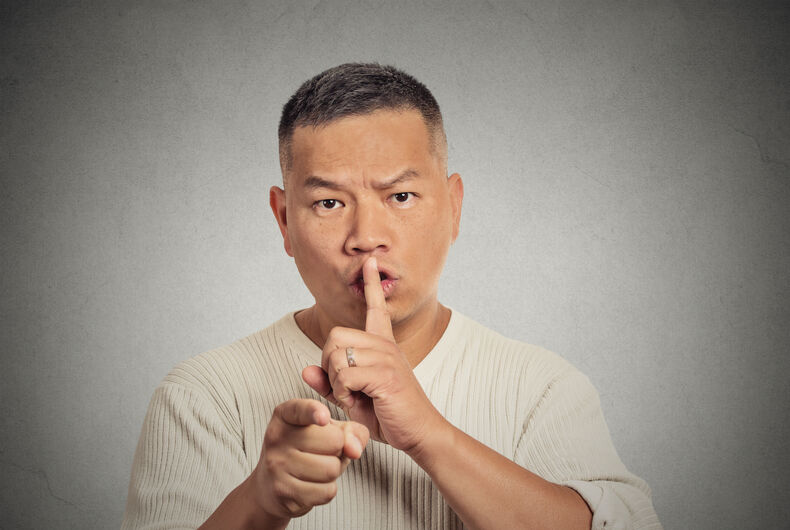 In a 12 to 8 vote, Florida’s extraordinarily controversial “Don’t Say Gay” bill — which bans primary school teachers from discussing LGBTQ identities in the classroom — has passed its final Senate committee and will now move to the Senate floor for a full vote.

The bill already passed the Florida House last week. If the Republican-dominated Senate votes in its favor, the only step from there will be for Gov. Ron DeSantis (R) to sign it.

DeSantis has already expressed support for the bill, saying that he believes it is “entirely inappropriate” for teachers to talk to their students about gender identity and claimed that some students are being told, “Don’t worry, don’t pick your gender yet.” DeSantis has not said outright if he would sign the bill, though.

During Monday’s meeting of the Senate Appropriations Committee, state Sen. Dennis Baxley (R), who sponsors the Senate’s version of the bill, claimed it isn’t anti-LGBTQ and that he “doesn’t hate anyone.”

“This does one simple thing – it decides who’s in charge,” he said. “I’m not trying to demonize anybody, I’m not trying to negate the values of teachers. I’m just trying to come back to center point. Parents must be in charge of these decisions.”

Democrats vehemently expressed their disagreement with this sentiment.

“When you single out people, there is a deep, deep, deep sense of hate,” said Sen. Jason Pizzo (D).

“I don’t ever remember telling my young students, ‘Don’t worry, you don’t have to pick a gender,’” added former teacher and current state Sen. Lauren Book (D). “I don’t remember teaching LGBTQ propaganda from secret lesson plans. And I don’t remember breaking any Florida law by telling a parent that they couldn’t review my lesson plans.”

An amendment meant to broaden the scope of the bill so it did not directly target LGBTQ people also failed. Proposed by Sen. Jeff Brandes (R), it would have changed the words “sexual orientation and gender identity” to “human sexuality and sexual activity,” which would have focused the bill on sex education rather than LGBTQ identities.

“If the intent is not to marginalize anyone let’s make sure we aren’t,” Brandes told the committee on Monday.

The committee was also not persuaded by the emotional public testimony that took place on Monday, during which teachers, students, and activists expressed deep concern about what should happen if the bill passes and students no longer feel comfortable confiding in their teachers.

“If parents know what’s best for their kids, why did my best friend get kicked out of his house and have to live with me?” said Orange County high school student Will Larkins.  “Why do so many kids get abused for their sexuality and gender identity?”

Public testimony persists nearly an hour in. An overwhelming number of those in attendance oppose the Don't Say Gay bill. Including students who traveled 7 hours from South Florida. pic.twitter.com/0U9WrIaOQa

Out gay Florida Rep. Carlos Guillermo Smith (D) — who has been speaking out against the bill from the beginning — posted a video decrying the fact that he was blocked from providing public comment against the bill.

“The censorship of LGBTQ Floridians is unprecedented,” he wrote on Twitter. “We will not be silenced.”

The Chair of the Senate Committee hearing #DontSayGay just blocked me from being able to provide public comment on the bill AND on the @JeffreyBrandes amendment to improve it. The censorship of LGBTQ Floridians is unprecedented. We will not be silenced. 🏳️‍🌈 https://t.co/hAkpCAj52a