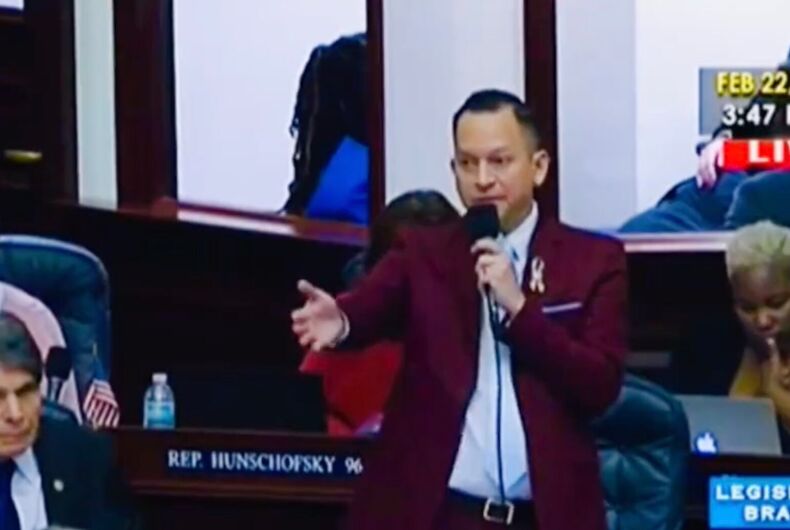 Out gay Florida Rep. Carlos Guillermo Smith (D) teared up on the state house floor while speaking out against his state’s discriminatory Don’t Say Gay bill, which seeks to ban teachers from discussing LGBTQ identities in the classroom.

During debates about H.B. 1557, Smith asked, “What topics specifically about people like myself, LGBTQ Floridians, are not appropriate to teach in the classroom? Is it topics about how LGBTQ people love one another? Is it topics about our marriages, which are legal in the United States and in Florida? Is it conversations about our families?”

Related: Florida Republicans are trying to ban teachers from talking about LGBTQ people

“This isn’t a direct response to anything Representative Smith said but I just want to caution all of us… I ask that you not ask questions or answer questions in ways that are personal to other members… I ask that we keep our questions to the substance of the bill.”

This is when Smith got emotional. Through tears, he thanked Sprowls for the guidance and said he’d do his best, but that “the bill is deeply personal.”

Smith later posted the video of his question to Twitter, writing that it was “really hard” not to make things personal because “attacks on our community are always deeply personal to me.”

I asked the #DontSayGay sponsor to explain what topics about LGBTQ people like myself he considers to be inappropriate in our schools.

Speaker Sprowls told us not make things personal, but for me that's really hard— attacks on our community are always deeply personal to me. 😢 pic.twitter.com/MDnxT5s4PA

Smith, who is Florida’s first LGBTQ Latino lawmaker, has been speaking out against the bill for quite some time. Last month, he posted a tearful video about the dire effects its passage will have and emphasized the need to support LGBTQ youth.

Referencing the anti-LGBTQ Pulse nightclub massacre that took place in the state, Smith said it is more important than ever to continue speaking openly about these issues.

History like the tragedy at @pulseorlando and its impact.

We SHOULD and we ARE encouraging these convos with our youth. This bill is not ok. pic.twitter.com/jySSG59PdM