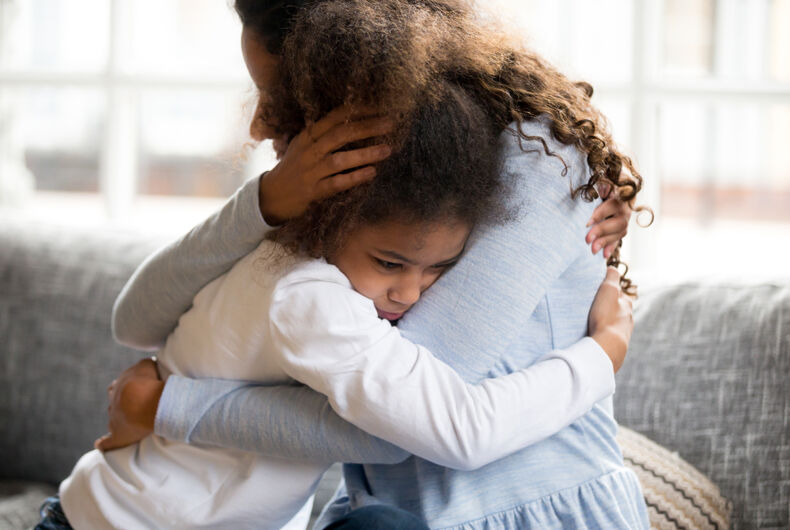 While the group claims that it is welcoming to transgender people (the website notes: “one of our advisors is trans”), it is broadly opposed to gender-affirming care for youth:

We do not believe that children are equipped to make life-long decisions about medical transition procedures. Adolescence and young adulthood is a key developmental stage during which identity is evolving. We believe that young people should be encouraged to accept — and to love — their bodies. We do, however, support the rights of mature adults to make informed healthcare choices regarding medical transition.

Gender GP explains that “detransition” refers to “when a person who has already transitioned returns to live as the gender assigned by their birth sex.” While not unheard of, detransitioning is uncommon and often a temporary response to the impacts of transphobia.

In the most recent U.S. Trans Survey, just eight percent of respondents reported detransitioning at some point, though 62 percent of those who returned to living as their assigned sex only did so temporarily. Reasons cited for detransition included harassment or discrimination fast post-transition (31%), trouble getting a job (29%), or pressure from a loved one, such as a parent (36%), spouse (18%), or another family member (26%).

While transgender people are much more likely to experience transition as a positive experience, the detransition, or “desistance,” narrative is often used to dissuade parents from providing children with gender-affirming care and as fodder for “radical feminist” and “gender critical” movements, like the ones author J.K. Rowling has come under fire for supporting.

“Genspect is an anti-trans, ‘gender critical’ organization ideologically affiliated with TERFism, ROGD [Rapid Onset Gender Dysphoria], and Alliance Defending Freedom,” Jenn Burleton, program director for the TransActive Gender Center Project and Lewis and Clark, told LGBTQ Nation. “They are promoting ‘workshops’ that appear to be trying to fool people into thinking they are ‘open to gender diversity.’ This tactic is meant to encroach on the work we, and others, do.”

TransActive provides services to transgender and gender-expansive children, youth, and their families as well as continuing education for transgender-serving professionals.

The half-day Genspect conference will include the perspectives of self-described “detransitioners,” as well as psychotherapist and author of Bully-proof Kids, Stella O’Malley. Session topics include the influence of Tumblr, correlations with autism, the non-transgender variance of butch lesbians and feminine men, and what to do “when the medical profession fails you.”

The event wraps up with an interview with Keira Bell on “What detransitioners need.” Bell is a member of the Sex Matters advisory board, who described her experience in an online petition, “I’m an ex-patient of Gender Identity Clinics where I was prescribed dangerous, experimental drugs and received a double mastectomy procedure. I am fighting to stop this from happening to minors.”

While Bell’s experience may be true for her, multiple studies and countless anecdotes make clear the overwhelmingly positive impact of gender-affirming care in the lives on transgender youth.

A 2021 study by the Trevor Project found that young people who received hormone therapy were much less likely to report recent depression or suicidal ideation. For those under the age of 18, access to hormone therapy was associated with a 40 percent lower rate of attempted suicide. For a community in which roughly half of all trans youth attempt suicide, gender-affirming care is a critical tool for prevention.

Jamie Bowman, an educator and advocate for families of transgender youth, told LGBTQ Nation she’s concerned about the harm this kind of event could cause to trans children whose parents are not knowledgeable.

“This event is indescribably dangerous. It uses propaganda and scare tactics to convince parents to not support their children and it will inevitably contribute to heartbreaking outcomes for these families that are subject to it,” Bowman explained. “These people are taking their own internalized transphobia and pushing it onto people who just want the best for their kids and genuinely think that this is it. It’s not. It’s the polar opposite and it’s terrifying.”

Bowman encouraged those seeking to learn about gender transition to center the experiences and perspectives of transgender youth and adults.

“If you have questions about your child’s gender, you should first ask your child about it! They’ve more than likely been researching, thinking, talking about it, etc. for quite a while before they brought it to you… I have two children who are transgender and the best thing I ever did was listen to them,” Bowman said. “Next, seek out adult trans people either online or in a local organization. Glean information from them, educate yourself, be present when they share their experiences. The best thing I did for my kids was put myself in a position to learn from people that share an experience with them that I will never understand myself in the same ways.”

Bowman pointed out that trans identities are not new, and detransition is not a common experience, despite opponents’ fondness for sharing decontextualized research to support their claims.

“I hope that these parents can see through the misinformation that this event is spreading and come to a point that they can support and love their children unconditionally before it’s too late. ”

Keira Bell @KLBfax went through the process of attempting to change her sex as a teenager through the NHS Tavistock’s gender service.
She has come to realise that there were underlying factors behind this decision, not that her sex was wrong. Sex is concrete and it does matter. pic.twitter.com/mrDslFCdd7