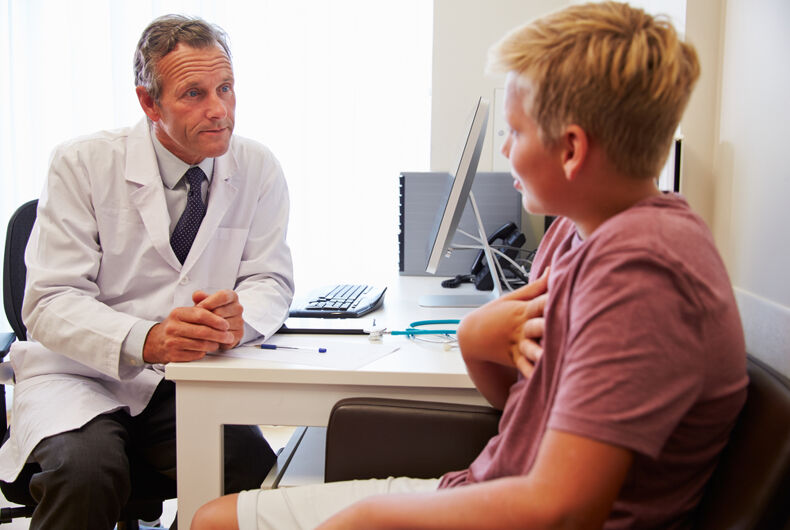 A large new study that involved thousands of transgender and non-binary youth found that hormone therapy significantly lowered their risk for depression and suicide.

Dr. Amy E. Green, a clinical psychology professor at the University of California, San Diego, and vice president of research for the Trevor Project, and her co-authors examined data from a 2020 LGBTQ survey that included over 11,000 trans participants between the ages of 13 and 24. 9000 of those participants answered the questions about gender affirming hormone therapy.

Half of the trans participants said that they were not getting gender affirming hormone therapy but wanted to, 36% weren’t interested in it at all, and 14% were getting it.

“Together, these findings indicate that youth receipt of gender-affirming care is based not only on their presenting concerns but also on their parent’s level of support, geography, and their social identities, which related to barriers to care among the broader population of youth as well,” the authors note.

“As the evidence for gender-affirming care grows, medical and mental health organizations are increasingly expressing support for it,” the authors state. “Given the well-documented risks of negative mental health and suicide among transgender and non-binary youth, it is necessary that those serving these youth provide care that is patient-centered, affirming, and evidence-based.”

The study’s results echo previous studies about puberty blockers, which are given at a younger age to delay the onset of puberty and the permanent changes it causes to the body so that young people and their families can have more time to understand their gender. A 2020 study found that teens who wanted puberty blockers and got them were at a much lower risk of suicidal thoughts for the rest of their lives, and a study earlier this year of trans teens in the U.K. found that they were happier after receiving puberty blockers.

“This study emphasizes the potential benefits of gender-affirming hormone therapy as a mechanism to reduce feelings of gender dysphoria and minority stress among transgender and non-binary youth — thereby working to improve mental health outcomes and prevent suicide,” Dr. Green said in a statement, adding that the study shows that “blanket bans on gender-affirming medical care” shouldn’t be passed.

She was referring to several states that tried to ban doctors from prescribing hormones to transgender youth this year, as well as Arkansas, which passed one such bill. Local health care workers anecdotally noticed an increase in suicide attempts when that bill was passed. A court-ordered an injunction against it.

“It’s clear that gender-affirming care has the potential to reduce rates of depression and suicide attempts while banning this vital care and exposing young people to harmful political rhetoric can cause real harm,” said Trevor Project CEO and Executive Director Amit Paley. “It’s critical that all transgender and non-binary youth across the country have access to medical care that is affirming, patient-centered, and evidence-based.”