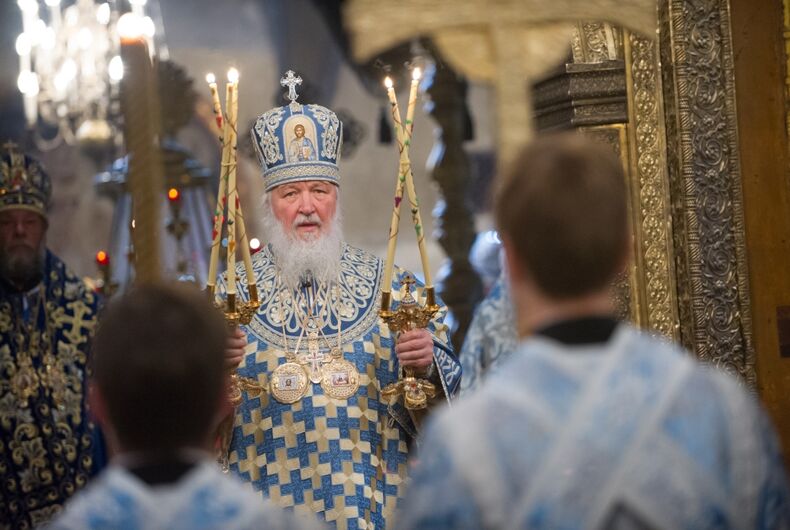 Moscow, Russia - 08 28 2017: Patriarch Kirill of Moscow and All Russia at a ceremony at the Assumption Cathedral in the Kremlin in Moscow.Photo: Shutterstock

While Russian President Vladimir Putin has drawn worldwide condemnation for invading Ukraine, the dictator has had unwavering support from the Russian Orthodox Church and its head, Patriarch Kirill.

Even as the Pope and other religious leaders call for peace, Kirill is justifying the deaths of innocent civilians by blaming gay people – specifically Pride parades.

Kirill declared that the war is about “which side of God humanity will be on” – western values of inclusion and tolerance or the country’s infamous persecution of the LGBTQ community at Kirill’s urging. Putin has made persecuting LGBTQ people a priority, from outlawing “gay propaganda” to arresting activists and banning LGBTQ organizations. Teenagers have been arrested for posting shirtless photos of men to social media.

“Pride parades are designed to demonstrate that sin is one variation of human behavior. That’s why in order to join the club of those countries, you have to have a gay pride parade,” Kirill said in a sermon for “Forgiveness Sunday.” He described the parades as a “loyalty test” to western values.

“For eight years there have been attempts to destroy what exists in Donbas,” he continued. Fueled by Russian-backed separatists, the breakaway region is being used as an excuse for Putin’s “military special operation.”

“And in Donbas there is a rejection, a fundamental rejection of the so-called values that are offered today by those who claim world power.”

Kirill has previously asserted that same-sex marriage laws are akin to Nazi laws or apartheid. Putin has accused Ukraine of being ruled by neo-Nazis as justification for his invasion, but the country’s president is Jewish.