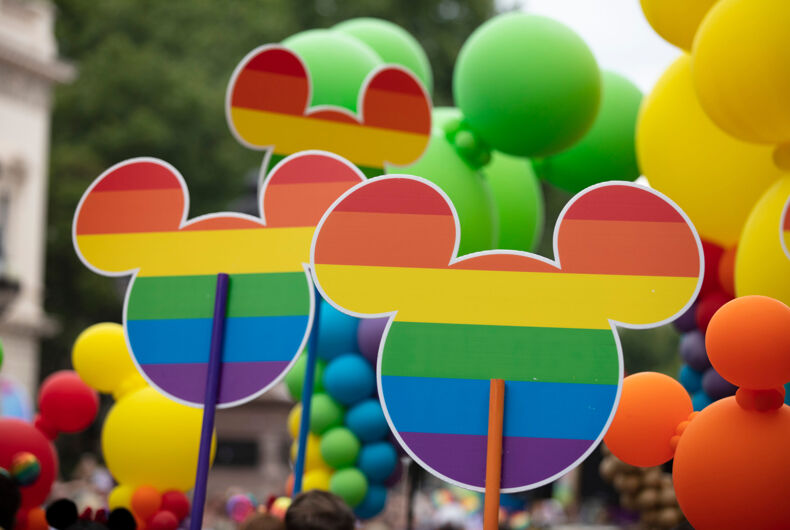 The Walt Disney Company is facing a boycott threat after the company donated to the GOP sponsors of Florida’s “Don’t Say Gay” bill that would prevent teachers from mentioning LGBTQ people in elementary schools.

And while other corporations moved to quickly condemn the measure, Disney instead opted to skip over the bill and promised to produce more “inspiring content” instead. The money consumers would pay to watch the content could presumably flow back to GOP politicians who are attacking the LGBTQ community.

Related: LGBTQ fans are calling Disney out for celebrating Pride. Here’s why.

The bill has passed the Florida House and is awaiting a final vote in the Senate.

“We understand how important this issue is to our LGBTQ+ employees and many others,” the company said in a statement made after an outcry from students across the state. “For nearly a century, Disney has been a unifying force that brings people together. We are determined that it remains a place where everyone is treated with dignity and respect.”

“The biggest impact we can have in creating a more inclusive world is through the inspiring content we produce, the welcoming culture we create here and the diverse community organizations we support, including those representing the LGBTQ+ community.”

Disney’s relationship with the LGBTQ community has been fraught with missteps and lackluster support. Historically, the company would fire any actors they found out were gay and has since  shied away from LGBTQ representation in their offerings.

While Gay Days at Disney have been happening for decades, the company’s parks only started to recognize the event after the tide had shifted on LGBTQ issues and the company was lagging far behind the rest.

Disney movies have frequently touted the “first gay character” in their films and cartoons. Most roles have gone to straight actors and the characters are often deliberately ambiguous; male characters are made flamboyant and relationships are hinted at but never explored.

While the company touts their LGBTQ employees, the children of married workers would be unable to mention their parents’ relationship in the classroom. The company that has claimed to have the interests of children at heart has apparently abandoned the ones with queer family members. And students have been the driving force behind the demand that Disney actively oppose the legislation and cease donating to rabidly homophobic politicians.

“I could not be more unhappy with their political activities, both in terms of whom they fund and how they lobby,” Emmy Award-winning filmmaker Abigail Disney, the great-niece of Walt Disney, tweeted after finding out the company had donated to the bill’s backers.

The company has not requested the Republican politicians return their donations. It has not said that they will stop donating to them either.

LGBTQ Nation reached out to the company for comment, but did not get a reply by publication.

Disney has made it clear that they will not take action to protect the lives of LGBTQ+ youth, and will continue to fund the politicians that seek to oppress them and erase their identities