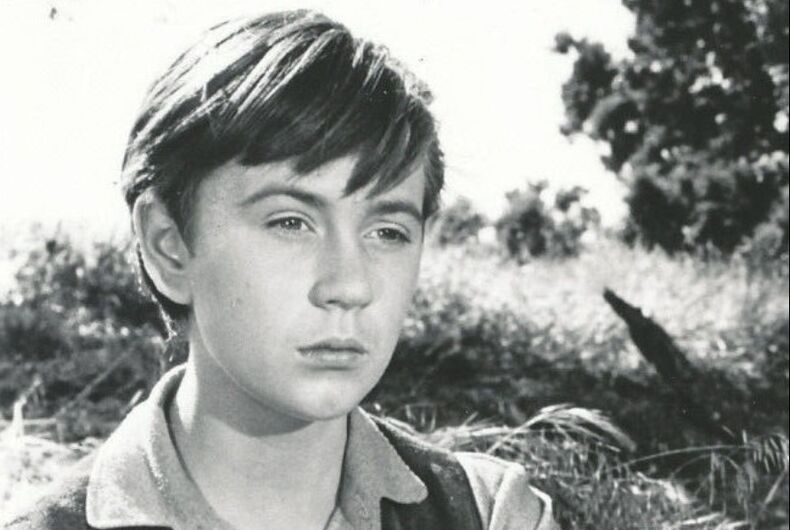 Tommy Kirk – the legendary child actor who starred as Travis Coates in Old Yeller and whose work for Disney came to an end when he was outed as gay – has passed away at the age of 79.

Originally from Kentucky, Kirk started acting as a teenager and had some success on television. Shortly after getting a role on The Micky Mouse Club, he got his biggest break when he got the lead role in Disney’s 1957 film Old Yeller, about the adventures of a boy and his dog.

The film was a success for Disney and Kirk went on to star in a number of films, including Swiss Family Robinson and The Shaggy Dog, in the late 1950s. By the 1960s he was acting in comedies for Disney, like The Absent-Minded Professor.

Throughout this time, Kirk would later say that he knew he was gay and “desperately unhappy.”

“I knew I was gay, but I had no outlet for my feelings,” he told Kevin Minton for a 1993 book. “It was very hard to meet people and, at that time, there was no place to go to socialize.”

He said he “admitted to myself that I wasn’t going to change” by the time he was about 18-years-old.

When he was 21, Kirk started seeing a boy whose mother found out about them and informed Disney. Disney refused to renew his contract, despite the success of his films.

“Even more than MGM, Disney was the most conservative studio in town,” he told the Shelby Star in 2013. “They were growing aware. They weren’t stupid. They could add two and two, and I think they were beginning to suspect my homosexuality.”

“Disney was a family film studio and I was supposed to be their young, leading man.”

He went on to act in several movies for other studios, getting arrested for possession of marijuana several years later, which cost him several roles.

The quality of movies he did got worse, almost losing his Screen Actors Guild card when he did two non-SAG movies. He left show business and came out as gay in a 1973 interview.

He went on to work as a waiter and a chauffeur and then a carpet cleaner. In 1990 he said he was poor because he “made a lot of money and I spent it all. No bitterness. No regrets.” He said that he fought addiction in the 1960s, which made it harder to have a career at the same time.

Petersen wrote on Facebook that Kirk was “estranged from what remains of his blood family.”

“You lifted him up when an industry let him down in 1965,” Petersen wrote to Kirk’s fans. “He was not bitter. His church comforted him. May God have mercy on his soul.”

On Twitter, Disney said that it’s “saddened by the passing of Tommy Kirk,” calling him a “beloved and iconic star.”

Some people pointed out that Disney wasn’t exactly accepting of Kirk when he was alive.

didn’t you fire him bc he was gay

Disney inducted Kirk in its Disney Legends hall of fame in 2006, the same year Elton John was inducted as well.