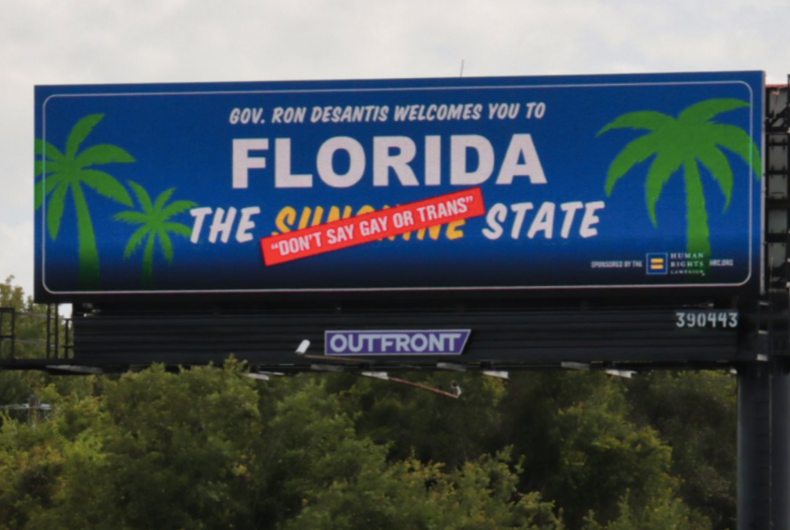 The LGBTQ organization HRC is welcoming people to the state of Florida with new billboards that draw attention to the state’s Don’t Say Gay law.

The billboards are referring to H.B. 1557, which bans discussions of sexual orientation and gender identity in lower grades and requires them to be “developmentally appropriate” in older grades. Instead of defining what these words mean, the law empowers parents to file lawsuits against school districts if they believe the law has been violated.

Opponents say that this will curtail any discussions of LGBTQ people, including those in the families of students and students themselves. And there’s already evidence that schools are going overboard in their enforcement of the law, banning even rainbow flags.

“Florida’s ‘Don’t Say Gay or Trans’ law is outrageous and discriminatory. It needs to be repealed immediately,” said Joni Madison, interim president of HRC. “Florida cannot be considered the ‘Sunshine State’ when Governor Ron DeSantis is putting so many of its constituents in harm’s way.”

Three billboards with the message were put up on April 21 in Orlando.

HRC and several other organizations are currently involved in a lawsuit to overturn the Don’t Say Gay law in Florida.