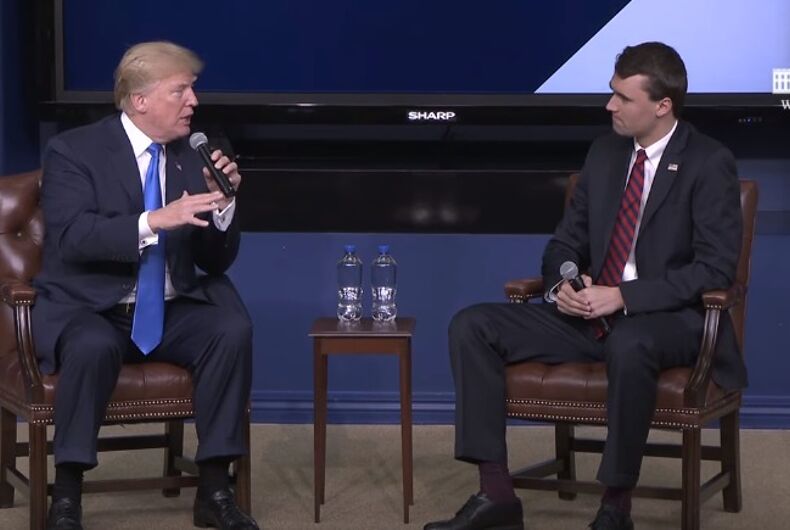 While most economists believe that money supply, aggregate supply and demand, and expectations about future inflation are some of the major causes of inflation in modern economies, Kirk insists that “there’s a lawmaker and a designer and being Christians, we believe those laws were made to be followed for our flourishing and our prosperity…. Outside of the religious component of this, there are laws of economics.”

Kirk said on his YouTube show yesterday he opposes transgender equality because “you do not get to determine your own reality.”

“So there’s a direct connection to inflation and the trans issue,” he continued. “You say, ‘Charlie, come on. They couldn’t be further apart.’ No, they’re exactly the same.”

Kirk’s economic argument, such as it is, is that since trans people are finding happiness by living as their authentic selves, then others who see them doing that have decided to “print wealth” by increasing the money supply.

His argument doesn’t make much sense considering that economists generally believe that the current spike in inflation in the U.S. is due to supply chain issues and pent-up demand following the COVID-19 pandemic, not the supply of money by itself.

Moreover, he did not present any evidence that economic policy makers understand transgender people’s lives in the way he believes that they do or that that understanding is at all affecting their policy decisions.

Which is not how either economics or gender work. If anything, the U.S. doesn’t seem to be getting much in terms of economic punishment considering that unemployment is down in the U.S. and wages are increasing.