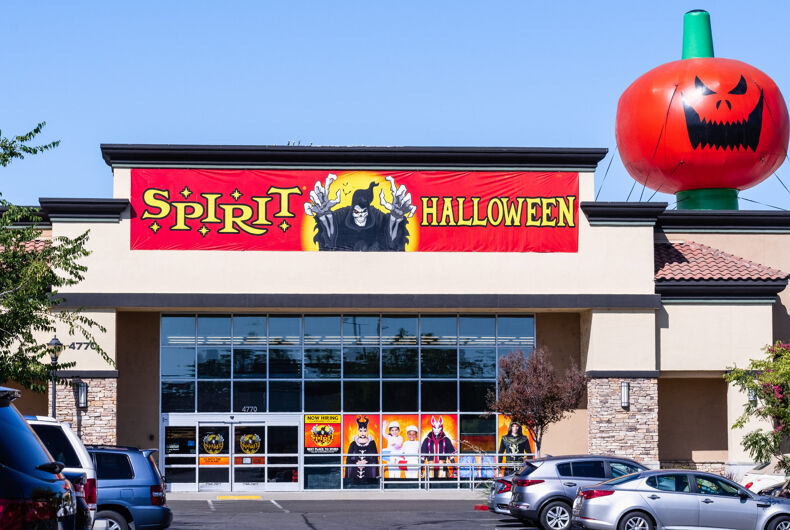 A West Virginia man is suing Spirit Halloween, the seasonal holiday supply store after a store manager allegedly insulted him with anti-gay slurs and then threatened to fight him.

When Anderson explained why he was returning the costume, store manager Thelmon Penn allegedly replied, “Maybe you shouldn’t try to wear women’s clothes.” Penn then allegedly refused to process Anderson’s returned costume, even though the store’s policies allow customers to return unworn costumes until October 28.

When Anderson asked for the manager, Penn identified himself as such. Anderson then told him his comments were out of line and requested Penn’s contact information, court documents allege.

“I’ll give you my name, but I’m not giving my number to a fa***t,” Penn allegedly replied. Penn then allegedly called Anderson a “f***ing p***y,” told Anderson to “get the f*** out of my store” and threatened to “beat his a**” if he returned.

Anderson ran out to his car with Penn chasing behind him, the lawsuit says. Penn then allegedly removed his shirt and attempted to attack Anderson, stating that he’d “beat your fa***t a**.” Anderson quickly jumped into his car, locked his doors and sped off while Penn allegedly struck the trunk of his car.

“Since that day, I’ve been looking over my shoulder,” Anderson said. “There have been times where I didn’t even want to run errands or go out in public — to work, even — because the anxiety of leaving the safety of my house is too much to handle.”

Andrew Schneider, executive director of Fairness West Virginia, said, “Incidents like this don’t just affect the victim. They also instill fear in members of the entire LGBTQ community. The truth is, discrimination is a real problem in our state, and that’s why it’s so important that we have laws on the books to protect people like Trevor. We need our leaders at the legislature and in Congress to take this seriously. No one should have to experience what Trevor did. No one should live in fear.”

Spirit Halloween is reportedly aware of the incident, according to The Los Angeles Blade.

What it’s like being a transgender journalist in Ukraine