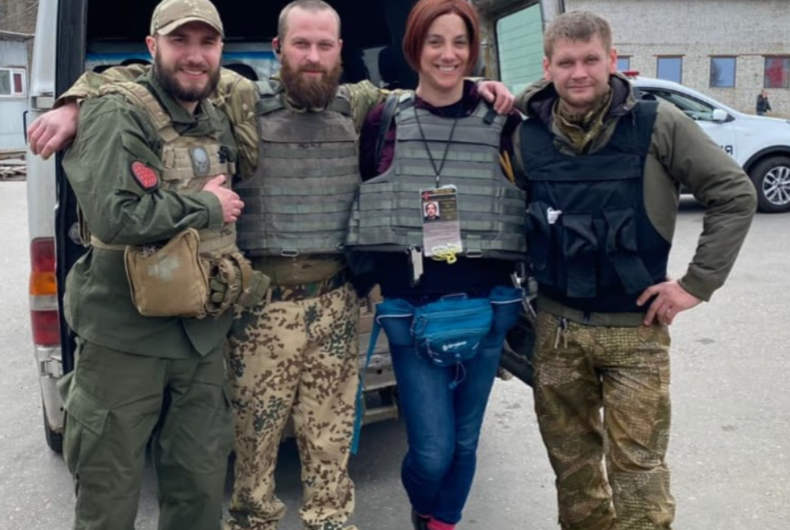 Day 40 in the war zone marked the first time a Ukrainian directly asked me what it was like to be transgender.

25-years-old, an attorney by profession, now a studious soldier manning checkpoints at the front line of Ukrainian defense efforts against the Russian invasion of his land, he took a moment to walk over to me during one of my visits to his outpost.

Related: The director of Kyiv Pride on saving LGBTQ lives during the war in Ukraine

Phone in hand, my Twitter profile opened, pointing out the part where I wrote that I’m trans, his words were simple.

“What is this? What does it mean? I’ve never met you before.”

Expanding the screen he continued.

“Tell me about how this is you?”

As I wrote in my first article for LGBTQ Nation, hanging over my trip to Ukraine was the question as to whether I’d even be allowed into the country due to issues surrounding my gender identity and how I’d be treated if I was given permission to enter.

Once my passport was stamped, once the Ukrainian Armed Forces credentialed me, I received one of the answers I needed and life in the war zone began.

Weeks passed and the second remained shrouded in mystery.

The topic of me being trans or a member of the LGBTQ community was enveloped in a silence that became uncomfortable.

While being trans is only part of what makes up who I am, certain physical aspects of my transition should have lent itself to even the most rudimentary comments, specifically my wig coming off every night as I slept next to men defending their nation.

Outside of my reporting for this publication, where my gender identity came up in interviews I conducted with the Director of Kyiv Pride and gay members of the Ukrainian military, only once in the first five weeks of my time in Ukraine did my past come up in conversation.

Driving with a member of the Kharkiv police, the officer next to me said he’d been looking at my Instagram page and saw I was an athlete. Blushing, I played off any physical prowess, and then he dropped the hammer, “When you looked the other way.”

And that was the extent of it until I answered questions posed by the lawyer-turned-soldier.

Coming back to the shared group sleeping quarters after the checkpoint-based conversation, further reflection led me to finally broach the topic to those closest to me that night at dinner.

Gathered around the dining table, normal small talk led to the pointed quizzing, and potential fall out of it, of my four dining companions.

Touching on their understanding of what being transgender is, and how they saw it applying to life in Ukraine, along with my situation specifically, the discussion commenced.

Unsurprisingly, I was the first out, or post transition, trans or non-binary person any of them had met.

When asked how they felt being around me, one person, a man in his early 30’s, admitted it had been, “Easy now because I didn’t realize you weren’t a woman when we first met.”

Another younger male, whom I sleep about 10 feet from, literally shrugged when my questions were translated for him and didn’t offer his views on the matter at hand.

Two others however engaged with me in an in depth, caring manner, despite the fact that one of them only knew at that moment despite us living together in Kharkiv for weeks.

Both females, one 21, the other 33, laughed and agreed in wondering why I went through the process of wrapping my head every night in a scarf before bed,

The younger one was succinct.

“It’s silly, you don’t need to put that (the scarf) on anymore. Stop it and just be comfortable, you are our sister.”

The older female, having seen several before and after pics of me on my social media accounts, opined that, “We like you better this way for sure.”

Some personal questions were broached, ones that in the United States I wouldn’t have tolerated but here I saw an opportunity for education, and the consensus was that if a person is happier by transitioning, no one should be able to get in the way of that.

As shelling intensified around our position, the 33-year-old had the final word on the matter.

“Sarah, the attacks on us, they are attacks on you, and every person. We are fighting the invaders so you can live with or without your hair, or those silly scarves.”