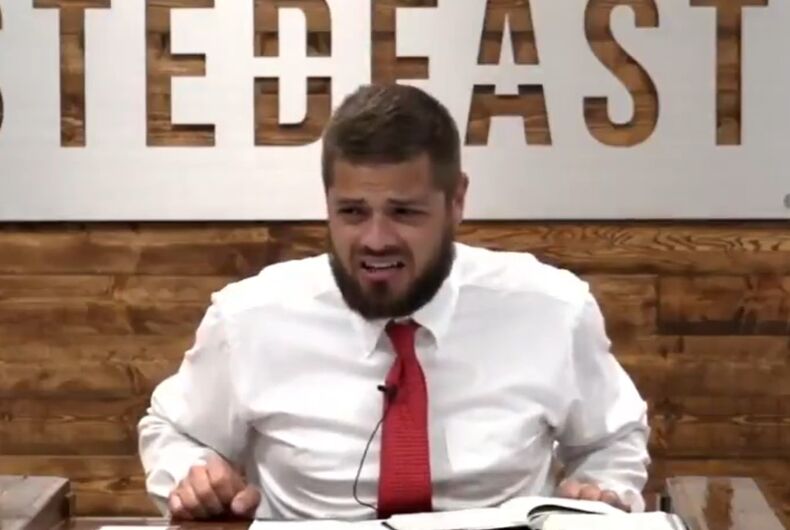 It turns out that a Texas pastor who called for the deaths of LGBTQ people – saying he “would love it if every fag would die right now” – preaches his disturbing rhetoric directly to young children.

Jonathan Shelley of the Stedfast Bible Church in Hurst, Texas can be seen in a disturbing video recently posted to the church’s YouTube channel going off on a hate-filled rant against LGBTQ people and “fornicators” directed at an audience of small children.

“Fornicators aren’t welcome in the church!” Shelley yells “So if there’s a whore she’s supposed to be thrown out until she repents and gets back in, and then on top of that, the sodomite’s never allowed in for any vow.”

“Love is love,” he then said in a mocking voice, “No. There’s no promise you could make, there’s nothing you can say, you’re never welcome go away. I just can’t wait until you just go to Hell.”

And yet somehow, it is the LGBTQ community that homophobes consider to be dangerous around kids.

Shelley has declared that gay men are all pedophiles and once celebrated the death of a 75-year-old gay man. Jim Fahy, a member of the Fort Lauderdale Gay Men’s Chorus, was killed when a driver accidentally drove into the Wilton Manors Pride Parade.

“And, you know, it’s great when trucks accidentally go through those, you know, parades,” Pastor Shelley said about the tragedy. “I think only one person died. So hopefully we can hope for more in the future.”

Yesterday, a Christian hate-preacher from Texas celebrated a gay man's death at a Pride parade.

"It's great when trucks accidentally go through those… parades… We can hope for more in the future… I think it's great! I hope they all die!"

(Warning: The language gets worse) pic.twitter.com/3VsYC8KmjA

In February, the Stedfast Bible Church was given five days to vacate its building after a judge ruled in favor of the nonprofit operating the building, who accused the church of preaching violence.

In a video somehow meant to defend the church, Shelley declared that “one of the most evil, wicked things on this planet is men with men, that grotesque and disgusting abomination.”

He added, “I’ve never advocated violence towards any singular person…I’ve only ever advocated for the legal sanctioned death penalty for homosexuals.”

LGBTQ image of the week: trans activist protests violence against women and LGBTQ people in Turkey