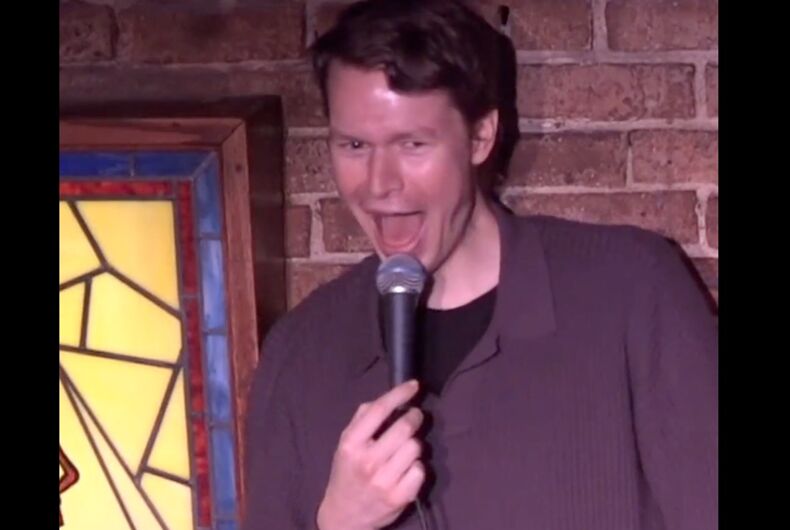 Out comedian Zach Zimmerman was in for a shock when his stand-up set went awry thanks to a pair of friends in the audience.

As Zimmerman teased someone in the audience for adamantly expressing her heterosexuality, her friend was about to toss out a surprise. As her friend stumbled through her responses, she came out as queer.

Related: These men were the first gay couple to get married in Chile

While Quinn’s friend, Elaina, was quick to proclaim her sexuality when Zimmerman asked if there were any straight people in the audience, she was at a loss for words as the back-and-forth continued.

After declaring the woman the “straight mayor” of the evening, Zimmerman turned his attention to Quinn.

“Well, are you straight?” he asked.

“Yes, you are…” her friend managed to get out before falling silent.

“Did you just come out to her?” Zimmerman asked as his face lit up with glee. “Elaina! Is this news?”

“No, I’m queer, I’m queer Quinn,” she responded. She said she hadn’t come out to her friend yet because “she lives in Seattle” and they don’t know each other that well.

“And she was so supportive,” Zimmerman joked before asking Elaina if she’d like to try responding to her friend’s coming out again.

“Of course I care about you… I don’t know what to say,” Elaina said, stumbling over her words. “Like obviously, that’s amazing, that’s so great! I’m happy for her! If she didn’t tell me before, it’s ok. I’m gonna love her no matter what.”

“We have to bully people into being allies, that’s what this world is about now,” Zimmerman joked. “No, that was beautiful.”

He called for champagne for the big moment and when asked if the waiter should bring two glasses, Zimmerman didn’t need to count.

sometimes you come out to your friend at the comedy show pic.twitter.com/Ms1qC5pFZY

A fan asked JoJo Siwa to stay in the closet. What happened next was amazing.