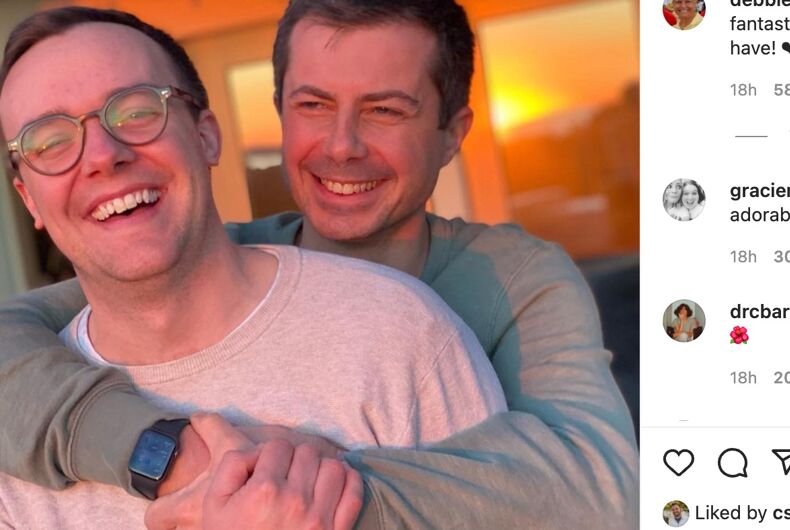 Transportation Secretary Pete Buttigieg may not look like a big romantic, but his deep connection to his husband, Chasten, is obvious for everyone to see. The men have never been shy about their relationship, making history simply by kissing after Buttigieg’s announcement he would run for president in 2020.

Now the out Cabinet member has taken it a step further. He won Valentine’s Day with a love letter to Chasten.

The couple recently adopted twins. One of the babies became very sick and the family spent Halloween in the hospital at his side until he recovered.

“Happy Valentine’s Day to the love of my life!” Buttigieg posted on Instagram along with a photo of the couple. “I’m even more thankful for Chasten now that our love is not just an incredible gift between us but the foundation of a family. Here’s hoping our hearts continue to grow with every step we take together.”

As the likes and comments rolled in, it quickly became clear that users have their own plans for the popular celebrity couple they’ve grown to love.

“First Gentleman after next election we hope!?” one person responded. “Pete Buttigieg for President!!” another added.

“One of my favorite couples,” someone posted. “Y’all are too adorable for words,” another agreed.

“You are both SO fantastic!!” one user posted, using extra exclamation points and several heart emojis to make their devotion clear. “What lucky children you have!”

Anti-LGBTQ people and Republicans shamelessly attacked the couple for not having children before they became parents, and after the children were born, the cabinet secretary was severely criticized for taking paternity leave. FOX host Tucker Carlson said the men were “trying to figure out how to breastfeed.”

While social media commenters swiftly criticized Carlson for his idiotic insult, Buttigieg himself also responded with characteristic classiness, calling out Carlson’s idiocy, hypocrisy, and privilege, all in the same clapback.