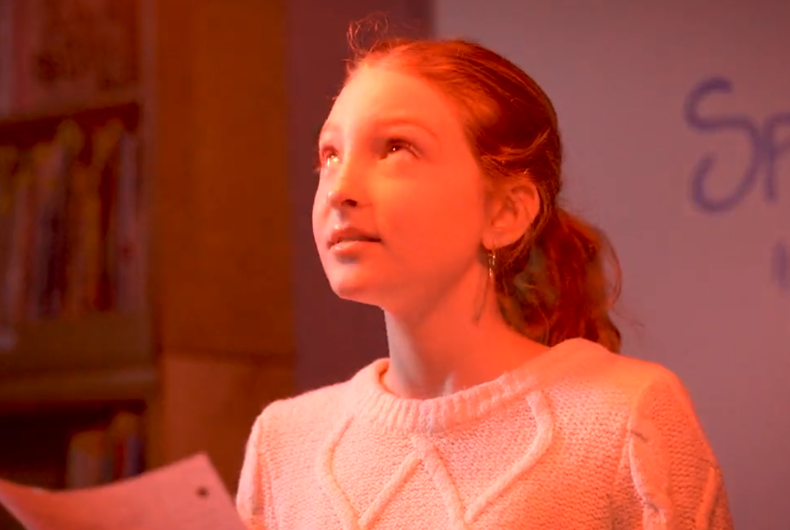 The alarm sounds when Chelsea mentions her two moms.Photo: Screenshot

The LGBTQ organization Equality Florida has released a television ad intended to push back against the proposed Don’t Say Gay bill, which is backed by Florida Gov. Ron DeSantis (R).

The ad is referring to H.B. 1557, which was passed by both chambers in Florida’s legislature, which bans teachers from discussing LGBTQ identities in the classroom. LGBTQ advocates like Chasten Buttigieg has pointed out that LGBTQ teens are at a heightened risk of suicide and the bill would cut them off from help from their teachers.

Meanwhile, proponents of the bill, like the Log Cabin Republicans, have been comparing discussing LGBTQ families in school to pedophilia.

The ad shows a student named Chelsea giving a report on her heroes, who she says are her two moms. When she says “moms,” an alarm sounds and a red light starts flashing, and the camera pans to a sign that says “STATE APPROVED TOPICS ONLY.”

“It’s OK,” the teacher tells Chelsea. “You should be proud. Go ahead.”

After she says that, a voice on the intercom says, “Mrs. Thompson, please report to the front office.”

🚨 ALERT 🚨 @GovRonDeSantis is fast-tracking the #DontSayGay bill, banning discussion of LGBTQ people or issues in classrooms. Help us stop the DeSantis Censorship and Surveillance State agenda.

The ad highlights a point that out Secretary of Transportation Pete Buttigieg brought up in the context of the bill, which is that children growing up in LGBTQ families won’t be allowed to talk about their families at school if the bill becomes law.

“Chasten, my husband, pointed out that if our kids some day- some Monday morning come into class, you know, and kids are sitting around and the teacher’s got the morning circle talking about how everybody’s weekends went, and one of them says, ‘I had the best weekend with my dads,’ is the teacher supposed to say, ‘No, we don’t talk about that here’?” Buttigieg asked on CNN last week.

Defenders of the bill – like the Log Cabin Republicans’ Chadwick Moore – argue that the bill only restricts’ teachers speech but that students will be able to have “private conversations” about their families still.

But as the ad highlighted, teachers often talk with their students about their personal lives and banning the discussion of an entire class of people implies that there is something shameful with being a part of that class.