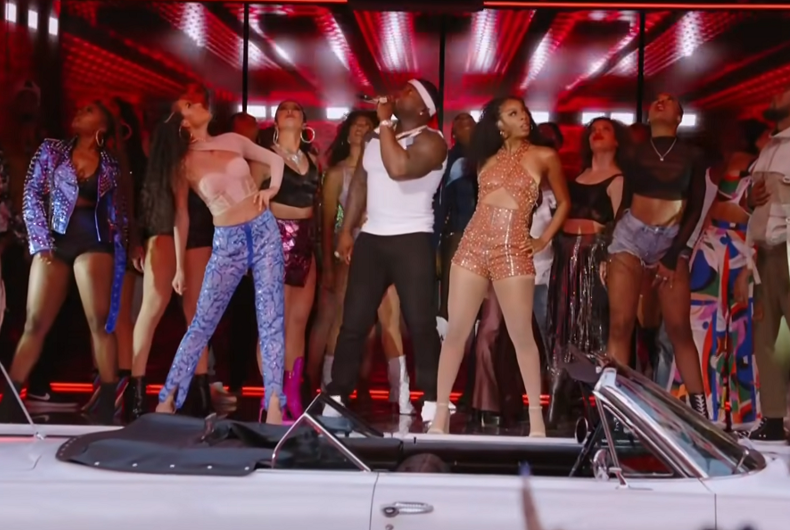 Conservative Christians are still reeling over the Super Bowl Halftime Show’s “scantily clad rear ends” and “stripper-like moves” that they have put together a petition that has already gotten over 10,000 signatures.

The far-right organization One Million Moms (OMM) – a project of the anti-LGBTQ hate group American Family Association – is “disgusted” with the Super Bowl Halftime Show, which was headlined by the legendary rapper Dr. Dre.

The show was an homage to 1990s and 2000s hip hop and R&B and was, all things considered, pretty tame. When 50 Cent performed “In da Club,” some dancers performed like they were dancing in a nightclub with short skirts. Several other backup dancers dressed like cheerleaders had skirts that stopped at their knees, fully exposing their calves. And singer Mary J. Blige wore shorts that showed off her upper thighs.

In other words, the cheerleaders were showing more skin than most of the dancers at the halftime show.

But the mostly Black performers were still able to attract OMM’s ire, which called the show “extremely vulgar” and said that the “nearly naked backup dancers” were “shaking their scantily clad rear ends and numerous other body parts as they twerked around the stage,” making it clear that OMM doesn’t know what twerking is.

“The dancers incorporated stripper-like moves, such as spread-leg squats, crotch shots, and a full view of a couple of females’ backsides,” OMM’s website reads. “How are children supposed to learn about respect and dignity when this is what they see on one of the world’s biggest stages?”

“Many families watch the Super Bowl together. Therefore, the halftime show should be family-friendly.”

The lyrics of the songs performed were also heavily modified to remove sex and drug references, but OMM said that they were “inappropriate.” The organization didn’t name what lyrics offended them specifically.

OMM made a petition that opens with: “I am completely disgusted with Super Bowl 56’s halftime show.”

“My family asked the NFL to keep the entertainment family-friendly, and instead, you delivered barely dressed performers and backup dancers twerking all over the stage,” the petition continues. “You should be ashamed to be associated with such a vulgar performance.”

The petition doesn’t contain a specific action or threat, which OMM petitions usually include. That is, OMM isn’t asking people to boycott the NFL or refuse to buy Pepsi products because Pepsi sponsored the show.

They claim the petition has nearly 11,000 signatures so far.

OMM isn’t the only group of conservative Christians to complain about the Halftime Show. Turning Point America founder Charlie Kirk was trending on Twitter yesterday with his complaint about the show.

“The NFL is now in the league of sexual anarchy,” he tweeted. “This halftime show should not be allowed on television.”

Ugh those bonnets are showing sinful amounts of hairline